NEWS Researchers at Umeå University and the Swedish University of Agricultural Sciences have discovered that increasing levels of carbon dioxide in the atmosphere have shifted photosynthetic metabolism in plants over the 20th century. This is the first study worldwide that deduces biochemical regulation of plant metabolism from historical specimens. The findings are now published in the leading journal PNAS and will have an impact on new models of future carbon dioxide concentration in the atmosphere. 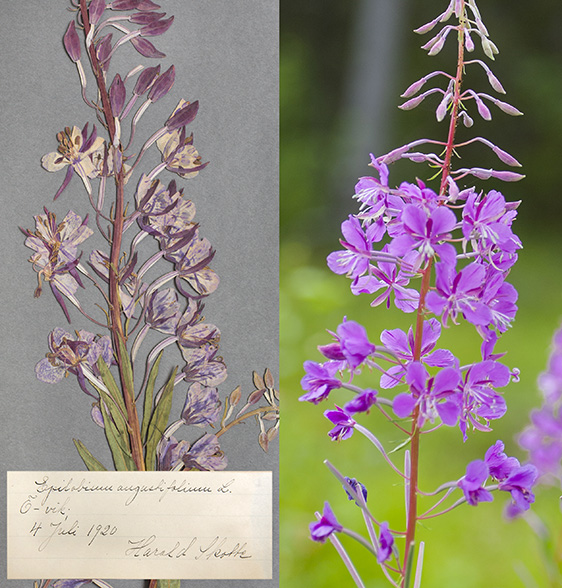 In most plants, the uptake of CO2 through photosynthesis is reduced by a side reaction called photorespiration. The research group has now found that the CO2 increase in the atmosphere over the 20th century has shifted the balance between photosynthesis and photorespiration toward photosynthesis. This shift has so far contributed to the global vegetation’s ability to dampen climate change by absorbing a third of human-caused CO2 emissions. The photorespiration pathway is known to increase with temperature, which means that temperature and CO2 effects predictably oppose one another. This implies that the CO2 -driven metabolic shift will be counteracted by future temperature increases.

Vegetation’s ability to capture CO2 from the atmosphere through photosynthesis is not only a decisive factor for the global CO2 balance but also in predicting future climate change and crop productivity. By monitoring plant metabolism retrospectively using historic plant samples, this research group has quantified how much increased atmospheric CO2 levels during the 20th century have contributed to plants’ ability to capture the greenhouse gas carbon dioxide.

“Until recently, studying how plants respond to increases in CO2 on decadal to centennial time scales has relied on simulations based on short-term experiments, because methods to detect long-term metabolic changes were not available. By reconstructing past metabolic shifts in response to environmental changes, we lay the foundation for better modelling of future plant performance,” says Jürgen Schleucher, professor at the Department of Medical Biochemistry and Biophysics at Umeå University, who led the study.

“We now have data showing the effect of CO2 on the level of metabolic fluxes in plants over decades back in time,” says postdoc Ina Ehlers, who performed most measurements for this first empirical study on shifts in plant metabolism driven by long-term environmental changes. The study was funded by the Swedish Research Council and equipment provided by the Kempe Foundation and the Knut and Alice Wallenberg foundation.

The researchers from Umeå University and the Swedish University of Agricultural Sciences, led by Jürgen Schleucher, observed shifted photosynthetic metabolism in both wild plant species as well as crops.

"We suspected that photorespiration was stealing away a portion of photosynthesis. Now we know it was leaving fingerprints," says John Marshall, professor of Tree Physiology and co-author of the study. Due to the fundamental biochemical origin of the observed shift, the same change should have occurred in most global vegetation.

The study analysed several different C3 plants, i.e. plants which collectively account for the majority of global photosynthesis, and of calories for human nutrition. In historic beet sugar samples that grew at different times between 1890 and 2012, the researchers observed a change in metabolic fluxes, which can fully be explained as CO2-driven shift, without a noticeable influence of cultivars, changes in agricultural practices or by plant breeding.

"The peat moss species that showed the same metabolic shift occurs widely over the northern hemisphere and is highly important for the CO2 capture of boreal peat soils," adds Mats Nilsson, professor in Biogeochemistry and collaborator in the study.

The researchers developed a new methodology, using NMR spectroscopy at the Umeå University’s core facility “NMR for Life”, to compare the metabolism in century-old herbarium specimens with new plants. By studying intramolecular isotope patterns of glucose in plants formed during photosynthesis, the researchers discovered that changes in isotope patterns are linked to changes in metabolic fluxes depending on the different CO2 levels. The method was first calibrated in greenhouse experiments and then used to compare historic and modern plant samples. The researchers were thus able to track changes in metabolism over centuries.

Read the article in PNAS