NEWS The highly bioinvasive water flea Cercopagis pengoi has spread to most parts of the Baltic Sea. However, there seems to be a barrier to its expansion somewhere in the border area between the Bothnian Sea and the Bothnian Bay. 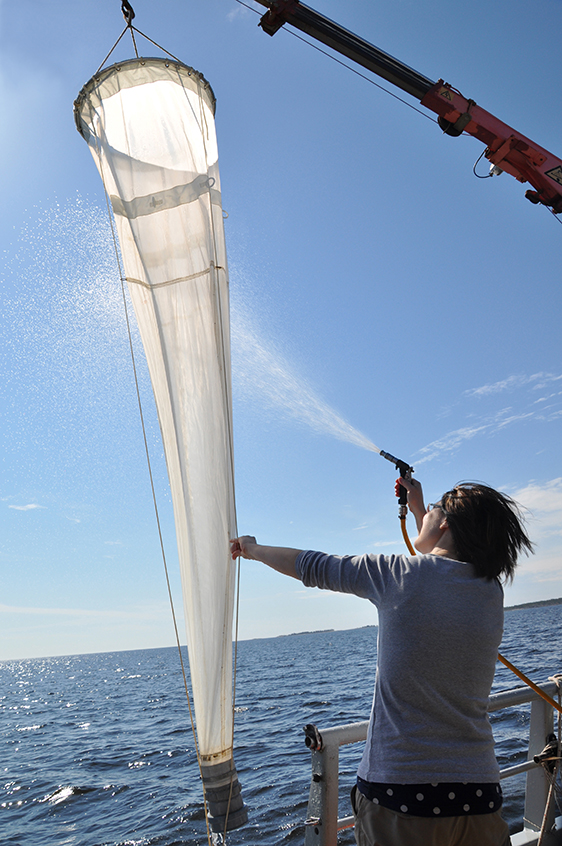 Zooplankton is sampled on a regular basis by Umeå Marine Sciences Centre, as a part of the environmental monitoring program. Cercopagis pengoi has been found in the Bothnian Sea since 1999.
Photo: Andrea Gillgren/UMF.

Ecochange researchers have analysed monitoring data and performed detailed field studies to fill in some of the knowledge gaps concerning the role of this species in the northerly parts of the Baltic. The new results can be highly pertinent considering climate change predictions for the region.

Cercopagis pengoi is a water flea which has spread from its native range in the Caspian basin to the Baltic Sea and other waters. It is a generalist predator capable of capturing both small and large prey. It can disturb or alter native ecosystems, and may also interfere with fisheries by clogging nets and fishing gear. Therefore, it is classified as a highly bioinvasive species.

The first time C. pengoi was found in the Baltic Sea was in 1992 in the Gulf of Riga. It spread rapidly, and was found in the Bothnian Sea in 1999. Many studies have been performed on C. pengoi in the Baltic Proper, and detailed documentation now exists on occurrence dynamics, effects on the food web, persistence of populations and potential for competition with native zooplankton-eating fish. However, references to its presence in the Gulf of Bothnia are comparatively few and significantly less detailed. In a newly published article a group of Ecochange researchers present results from both twelve years of monitoring data and a complimentary field study in the Bothnian Sea and the Bothnian Bay.

The Ecochange researchers added a more detailed sampling program during 2011 and 2012 to the monitoring data, to study the impact of C. pengoi on the food web structure in the Gulf of Bothnia. They were interested in questions concerning C. pengoi’s persistence, its potential impact on the native zooplankton community, and its contribution to fish diet.

The results from the studies indicate that there appears to be a barrier for the invasion of C. pengoi somewhere in the border area between the Bothnian Sea and the Bothnian Bay. The species appears to be incorporated into the zooplankton community in the Bothnian Sea, but close to absent in the Bothnian Bay. Both temperature and the abundance of other zooplankton species are suggested as possible factors that may uphold this barrier. C. pengoi benefits from high temperature, as it originates from warmer waters. However, the abundance of suitable prey species also seems to be of great importance for the distribution of C. pengoi.

So, does C. pengoi have an impact on the food web in the Bothnian Sea? At least it definitely did during the two invasion years 2006 and 2007, although the effect seemed to be temporary. At the coastal station the normally dominant zooplankton Bosmina and Eurytemora were strongly depleted. At the off-shore station Acartia were reduced, while Bosmina interestingly increased. C. pengoi is known to compete for prey with other zooplankton-eating organisms, such as some fish species. On the other hand, they are eaten themselves by zooplankton-eating fish. In the current study C. pengoi was found in the stomach content of sticklebacks caught in the Bothnian Sea but not in those caught in the Bothnian Bay, which indicates its importance as food for fish.

C. pengoi seems to have come to stay in the Bothnian Sea, while physical and biological factors represent a barrier for its expansion into the Bothnian Bay. However, increased temperature and altered ecosystems due to future climate changes might liberate C. pengoi from the barrier preventing it from expanding northwards. The study highlights some knowledge gaps, and points out the need for more research and monitoring focusing on the invasive species C. pengoi in particular.