More than 30 years of internationalization

NEWS In Februari 2016 The unit of Epidemiology and Global Health presented 30 years of education and research, during Umeå university's event Kunskapsnoden at Grand Hôtel in Stockholm. 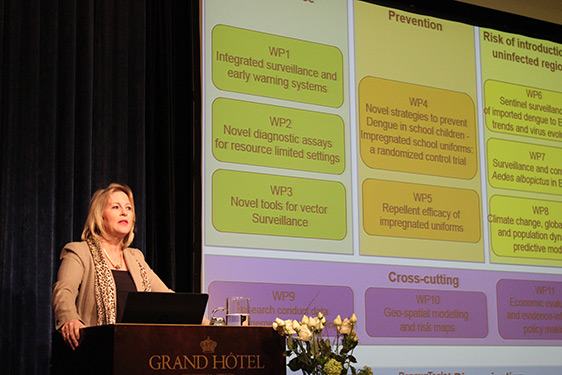 The programme at Grand Hôtel covered widely-spread topics such as health surveys in Västerbotten county, arteriosclerosis, Dengue fever, climate change and health economics. Still, these few themes from the programme do not by far illustrate the width of the operations that really fulfils the objective of Umeå University’s Vision 2020: “Umeå University is facing the future with knowledge across borders and boundaries”.

Listen to the lectures at Grand Hôtel - all in English

VIPVIZA – Will you live healthier if your atherosclerosis is visualised?
Margareta Norberg, Associate Professor & Coordinator of the Västerbotten Intervention Program.

Epidemiology and Global Health was formed in 1986, when Stig Wall (current professor emeritus) initiated the break-up from the then Department of Social Medicine to form its own unit for research and education within epidemiology and global health (which nowadays falls under the Department of Public Health and Clinical Medicine).

“This unit is special, and was probably somewhat a cuckoo in the nest within the Faculty of Medicine. You see, in many other parts of the world, our equivalent is organised within faculties of social sciences,” says Professor and Head of Unit Anneli Ivarsson, paeditrician mostly recognised for her research on coeliac disease.

“We really are a mixed group of staff as regards to age, gender and ethnicity. Interdisciplinary and bilingual. Our working language is English but everyone who stays for a longer period of time is encouraged to learn Swedish,” continues Anneli Ivarsson.

She had her first contact with the department already in 1991, when she as a young paeditrician needed to understand why an increasing amount of children developed coeliac disease (gluten intolerance), which had until then been believed to be a hereditary disease. Could environmental factors be a part of the puzzle? Using epidemiology methods, she was able to prove that so was the case.

“Another strength of ours is that we make sure research and education has close relations. Everyone is expected to contribute with what he or she is best at, which means that all researchers teach – from a few hours to 40 per cent of their post. Even me as head of unit.”

A concept that apparently works. In the National Agency for Higher Education evaluation in 2011, the unit’s international two-year Master’s Programme in Public Health was the only in the country to receive the grade “Very high quality”. It was closely followed by the one-year Master’s in the same subject. Read about the evaluation process 2011–2014.

The researchers at Epidemiology and Global Health have also had a great number of international assignments as councellors for international organisations such as the EU, UN and the World Health Organisation (WHO). Prior to the climate conference COP21 in Paris last year, Joacim Rocklöv (associate professor) participated in the IPCC:s assessment report, and at the production of the UN sustainability development goals, Maria Nilsson (researcher) participated, she was also a part of the Lancet Commission on Health and Climate Change, where Peter Byass (professor) held the post of senior adviser.

Since the start, more than 160 doctoral students have started their studies of whom 111 have so far completed them. At present, the unit has 70 master’s students from 41 countries. Since 1993, the total amount has reached 675, from about 80 countries across the world.

“It was a huge challenge when tuition fees were introduced for students outside of the EU as our main target group has been students from low and middle income countries. But from year to year, the number of applicants has yet again started to increase and nowadays there is always keen competition for the spaces to our programmes. Not least to our newly started programme focusing on health economics – an important area where many more practisers are needed.”2016-01-21: Major increase in applications to international master’s programmes.

“It really is important to us that the unit consists of people with such various backgrounds as regards to age, gender and nationality – foremost because learning within both research and education goes two ways, not just from north to south but in the opposite direction too,” concludes Anneli Ivarsson.

More about Epidemiologi and Global Health

Huffington Post: Peter Byass, conducts his research on climate change and cause of death