NEWS A prize committee at Umeå University’s Faculty of Medicine recently awarded the 2017 Erik K. Fernström Prize to Nasim Sabouri, Group Leader at the Department of Medical Biochemistry and Biophysics. 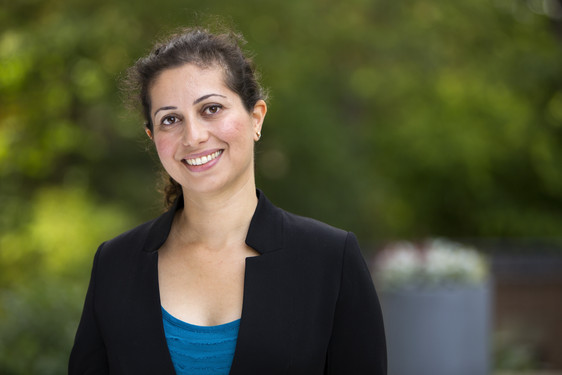 Nasim Sabouri receives the prize awarded to young, promising and successful researchers for her work focusing on maintenance of genome integrity and consequences of modifying the program of DNA replication.

In the prize motivation, the Committee highlights Nasim Sabouri’s groundbreaking research on the enzyme Pfh1 and its role in dissolving DNA structures. The presence of the four-stranded DNA, also known as G4 structures, has been associated with both cancer and HIV. The committee also notes her academic leadership and points out that she represents a new generation of Umeå University researchers established both nationally and internationally.

Since joining Umeå University in 2012 as a researcher, Nasim Sabouri has received the Swedish Research Council’s Distinguished Young Researcher’s Grant as well as grants from the Kempe Foundations and the Wenner-Gren Foundation, among others. She has also been named Wenner-Gren Fellow, SSMF researcher, and Wallenberg Academy Fellow. As a group leader, Nasim Sabouri has published several articles in journals such as PLOS Genetics, Nucleic Acids Research and Chemistry.

At Umeå University, Nasim Sabouri has established an internationally leading research program about the enzyme Pfh1 and G4 structures. The existence of G4 structures within cells have long been debated, but Nasim Sabouri’s findings have provided additional evidence that the four-stranded DNA variant exist and may affect DNA replication and transcription. In a series of research articles published in 2016, Nasim Sabouri has also described how they identified a number of molecules that can be used to stabilize G4 structures in vitro. The group is now investigating these molecules in vivo in terms of their capacity to regulate and stabilize G4 structures. Their ultimate goal is to find molecules that may be used in cancer treatments.

The Fernström Prize Committee also highlights Nasim Sabouri’s academic leadership, which have led to prestigious commitments including assignments for the Swedish Research Council (VR) and the Swedish Society for Medical Research (SSMF). Nasim Sabouri is also involved in research education at the Faculty of Medicine, both in terms of teaching in the medicine-, dentistry- and biomedicine programs, and as a member of the research education advisory committee (FUT) from 2014-2017.

After receiving her Master’s Degree at Stockholm University in 2004, Nasim Sabouri began her doctoral studies at Umeå University under advisory supervision of Professor Erik Johansson at the Department of Medical Biochemistry and Biophysics. Upon earning her Doctoral Degree in Medical Chemistry in 2008 she received a 5-year post-doc scholarship from Wenner-Gren Foundation and joined Professor Virginia Zakian at Princeton University. In 2012, Nasim Sabouri returned to Umeå University to establish a research group that today includes two doctoral students and three post-docs.

Nasim Sabouri will be honored at the Umeå University's annual academic ceremony on Saturday, October 21. The Fernström prize-giving ceremony will take place at Lund University on November 7.

Shipowner Eric K. Fernström’s Prize for young scientists is given annually at medical schools in Sweden. In Umeå, the prize winner is designated by a special committee, chaired by the Dean of faculty of medicine.