New clues about the ageing memory functions of the brain

NEWS A European study led by Umeå University Professor Lars Nyberg, has shown that the dopamine D2 receptor is linked to the long-term episodic memory, which function often reduces with age and due to dementia. This new insight can contribute to the understanding of why some but not others are affected by memory impairment. The results have been published in the journal PNAS. 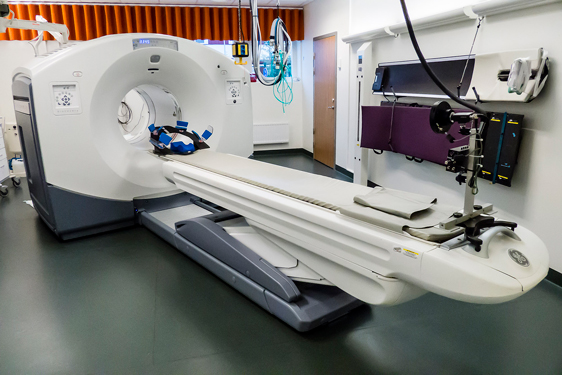 Caption: PET examination is a good method that for instance can be used to study the brain’s dopamine system. The examination involves lying on a bed inside a circular camera. The result after processing the data is a three-dimensional image of for instance the brain. Photo: Mikael Stiernstedt.

Using brain-imaging technologies (PET and MRI), memory tests and statistical analyses, Professor Lars Nyberg and his colleagues are trying to capture what happens to our memory and our brain as we grow old. The neurotransmitter dopamine is of significance to our motor functions but also to memory and other cognitive functions. The D1 receptor system has been linked to functions mediated by the frontal lobe, but it has been unknown what specific role the D2 receptor system has.

In this study, a PET camera was used to examine individual differences in the D2 system in a vast group consisting of 181 healthy individuals between the age of 64 and 68. All participants also had to take part in an all-inclusive performance test of the long-term episodic memory, working memory and processing speed along with an MRI assessment (which was used to measure the size of various parts of the brain).

Researchers could see that the D2 system was positively linked to episodic memory, but not to working memory or to processing speed by relating PET registrations to the cognitive data. Researchers could also see that the D2 system affects the functioning of the hippocampus in the brain. The hippocampus is since long linked to long-term episodic memory.

“Our results link the dopamine D2 receptor to long-term episodic memory, likely via hippocampus functioning. Episodic memory is often reduced with age and in people with dementia. Hence, impairment of the dopamine system are important to consider when attempting to understand the bases of impaired cognitive abilities due to ageing,” says Lars Nyberg, professor in Neuroscience and Director at Umeå Centre for Functional Brain Imaging (UFBI).