NEWS Researchers at Umeå and Stockholm universities in Sweden and Johns Hopkins University School of Medicine in the US have published a new study in the journal Molecular Cell. In the article, they show how the protein CBP affects the expression of genes through its interaction with the basal machinery that reads the instructions in our DNA. 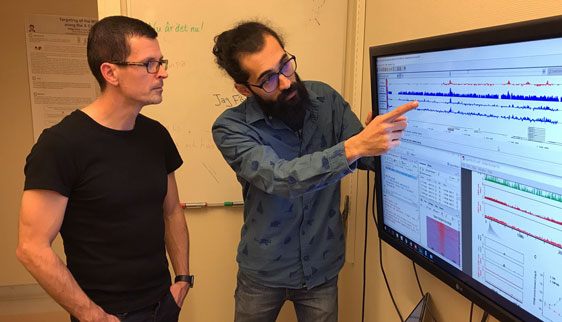 Our gene pool, our DNA that is, contains instructions for how the cell should assemble functional proteins. Before the DNA code can be translated into a string of amino acids that then fold into a functional protein, an intermediate RNA molecule needs to be produced. This RNA molecule is a copy of the DNA region, or gene, that contains the instructions for a specific protein. Various proteins are needed in different amounts in various cells, and much of the regulation of protein levels takes place by controlling how many RNA copies are produced from each gene.

RNA polymerase is the enzyme that produces the RNA copy, and the amount of RNA produced from each gene depends on two main steps: the recruitment of RNA polymerase to the start of a gene; and the release of the enzyme from the start position so that it can begin the copying process. Per Stenberg’s team at Umeå University, together with Mattias Mannervik’s team from Stockholm University, and John Lis’ team at the Johns Hopkins University School of Medicine in the US, has studied how the protein CBP affects these two steps.

“We, as well as others, have previously shown that the protein CBP is involved in several different processes in the cell. But it has not previously been known that CBP is directly involved in the recruitment of RNA polymerase to the genes. We can also show that it depends on an interaction with a previously known factor, TFIIB,” says Per Stenberg, researcher at the Department of Molecular Biology at Umeå University, and at the Swedish Defence Research Agency (FOI).

When the function of CBP is experimentally disrupted, genes have a hard time recruiting RNA polymerase, which will further lead to a lower amount of proteins to be produced. By using novel methods developed in John Lis’ lab, it was discovered that CBP also affects the efficiency of the release of RNA polymerase from the gene start so that it can initiate the copying process.

“We were really surprised when we discovered that without CBP, the RNA polymerase cannot correctly position itself at the gene start, and that it had a harder time initiating the copying process,” says Per Stenberg.

The new insights have been published in the journal Molecular Cell, and enhance our understanding of gene regulation at the same time as it can also explain why the protein CBP is often affected in certain forms of cancer, for instance prostate, breast and lung cancer.

Per Stenberg, researcher at the Department of Molecular Biology, and the Swedish Defence Research Agency (FOI)Phone: +46 90-785 67 77,
Email: per.stenberg@umu.se