NEWS On 11-12 May, Umeå University hosts 52 PhD students from all over Sweden during a 2-day course event in Umeå to learn about what are the current challenges in making clouds more effective, focusing on making clouds more autonomous. The event includes keynote speakers from Google and Burt, the latter being a Swedish company making great use of cloud resources. 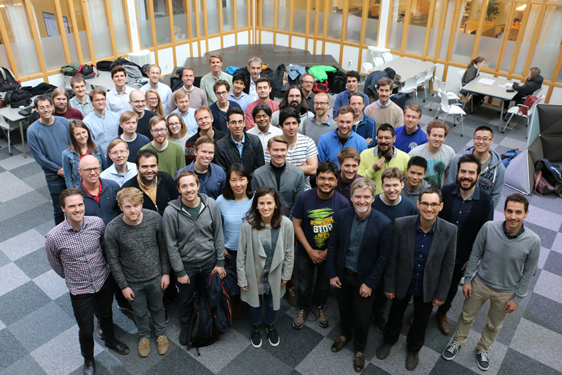 Course organizer Cristian Klein comes from France and he is a researcher at the Department of Computing Science. He belongs to the research group on cloud computing. Photo: Alex Förderer

Today the word “autonomous” increasingly appears in the headlines when talking about self-driving cars and robots, or other devices that physically interact with humans. Similar techniques are now also increasingly being used to managed computer systems and software in large warehouses with 100,000 of computers -- called data-centers. Cloud computing promises to make it easier to program these warehouse-scale computers while maximizing performance and reducing cost.

“Data-center management has become a dull and error-prone task, which is why clouds need to become more autonomous. Instead of humans constantly steering the cloud, they should only type in the destination, with the cloud itself ensuring that the goal is reached quickly and safely”, says Cristian Klein, Researcher at the Department of Computing Science and the course’s main organizer.

The event is part of the Wallenberg Autonomous Systems Program (WASP), whose aim is to create the necessary skills to cope with the future demand of making systems and software more autonomous. WASP is Sweden's largest individual research program ever, and provides a platform for academic research and education, fostering interaction with Sweden's leading technology companies. WASP's key values are research excellence and industrial relevance.

For more information about WASP and Umeå University’s role in WASP, please contact: