Pharmaceutical residue in water result in bold and voracious perch

In the lab young, naturally spawned perch were exposed to the same concentrations of the anxiety-moderating drug Oxazepam as in perch caught in River Fyris. Ecologist Tomas Brodin and his associates then studied how the drug influenced the behavior of the fish. Photo: Johan Gunséus

Study in Science shows unexpected effect on the ecosystem

Drugs used to treat anxiety later enter waterways via wastewater effluent and result in bold, asocial fish that feed voraciously. These behavioral changes may seriously alter the ecological balance in aquatic systems. This is shown by a research team at Umeå university, Sweden, in an article published in Science.

– A changed eating behavior in one fish species kan change the balance of the ecosystem. For example zooplankton can decrease, resulting in increased algal growth and algal blooms, which in turn may affect both fish and other species negatively, says ecologist Micael Jonsson, one of the scientists behind the study.
When scientists from different fields get together it may result in new angles of research. Jonatan Klaminder, who studies pollution, happened to hear Jerker Fick, who investigates pharmaceutical residue in the environment, being interviewed on the radio about his research.Because they both work in the same building, the Chemical Biological Centre at Umeå university, they met and started talking. Ecologists Tomas Brodin and Micael Jonsson who study fish behavior and aquatic ecosystems were invited to join the conversation.
Measured drug concentration in perchThis sparked the idea to investigate if pharmaceutical residue in waterways alter the behavior of fish and in turn whole ecosystems. Drugs are often stable compounds designed to quickly medicate and then leave the body. They end up in sewage and because they cannot be removed by wastewater treatment plants they are often found in downstream waterways.There has been great concern that organisms in aquatic environments are affected by such involuntary medication. The study at Umeå University is the first so far showing that low concentrations of Oxazepam, a drug commonly used to treat anxiety, and that is found in Swedish waterways, actually alters behavior in fish. The study, published in Science, has been carried out in several steps. First of all Jerker Fick measured concentrations of Oxazepam in River Fyris in Uppsala, Sweden, and in perch caught in the river. In the lab the scientists then exposed naturally spawned juvenile perch to water with environmentally relevant concentrations of Oxazepam and compared their behavior to perch that had not been exposed to the pharmaceutical.
Bolder, more active fishSubstantial differences in behavior were seen between the groups. Perch are normally very wary, they tend to stay close to their shoal and thereby avoid being eaten by predatory fish. However, perch that had been exposed to Oxazepam were considerably bolder.– They became more asocial, more active and tougher, says Micael Jonsson. Increased boldness also made them feed faster.
Left: The research group measured concentrations of Oxazepam, a drug commonly used to treat anxiety, in River Fyris in Uppsala, Sweden, and in perch caught in the river.The drug made the fish less inhibited, the scientists noted. Instead of hiding, only making short outings to find food, the perch spent most of their time eating. This change in behavior increased their energy intake and the food resource (zooplankton) was depleted much faster.
– Normally perch are shy, although there are natural variations between individuals, says ecologist Tomas Brodin. They are more or less bold, but never as bold as under the influence of Oxazepam.

Extensive ecological effects But the observed behavioral changes are not necessarily positive for the fish. In a natural environment where predatory enemies are lurking in the reeds overconfident fry risk being eaten. This can influence propagation and survival of a species. A changed feeding behavior in perch likely has extensive effects on the whole ecosystem.– But we can still only speculate on how the ecosystem will change, says ecologist Jonatan Klaminder. Further research is needed.– For example we would like to create small experimental ecosystems with perch, zooplankton and algae, where we can add pharmaceuticals and see what happens, says Micael Jonsson. Will we see more algae, lack of oxygen and finally a collapse of the system or will something totally different happen?
”Have to eat four tons a day”Perch react to Oxazepam because their brain and the human brain have the same kind of target receptor for the drug. But if fish behavior is so clearly affected by pharmaceutical residue in water, what about humans? Are the compounds harmful to us? 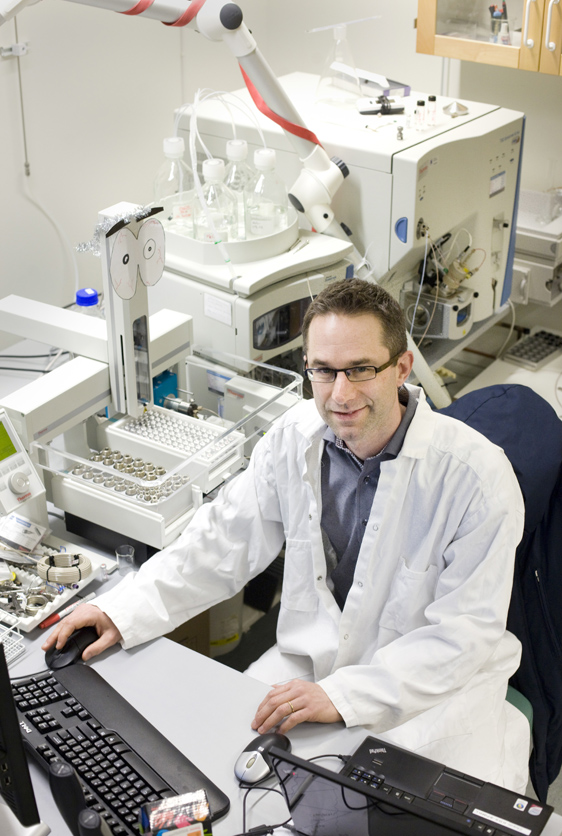 – You would have to eat four tons of fish from River Fyris every day to get the equivalent of a single Oxazepam pill, says chemist Jerker Fick (left). In addition the concentrations found in water are lower than in fish, where they accumulate over time. An example: scientists have studied drug residue in the drinking water in Berlin. They estimated that a person would have to drink from the water for 32 years to reach levels corresponding to one pill of the drug that was found in the highest concentration.Oxazepam is one of many drugs used to treat anxiety and they all affect the same receptor system in the brain. The drugs are essential. There is no reason to stop giving them to patients and those who use them should not feel guilt for the sake of the environment, Jerker Fick argues.
– It takes at least 10–15 years to develop a new drug and there is no guarantee that a new one means less impact on the ecosystem. The challenge is for wastewater treatment plants to find better methods to clean the water from pharmaceutical residue. Waste water contains a complex mix of chemicals and today the treatment plants are not equipped to deal with them.

Perch react to Oxazepam because their brains have the same kind of target receptor as human brains for the drug. Pharmaceutical residue in water alter the behavior of the fish, but that should not scare people from eating fish or drinking water from the stream, says chemist Jerker Fick.
– You would have to eat four tons of fish from River Fyris every day to get the equivalent of a single Oxazepam pill. Photo: Bent Christensen