NEWS On 17 September, renowned American historian and feminist researcher Joan Wallach Scott will be giving a lecture at Umeå University in correlations with the 50th anniversary week celebration. Her work has challenged the foundations of conventional historical practice including the nature of historical evidence and historical experience. 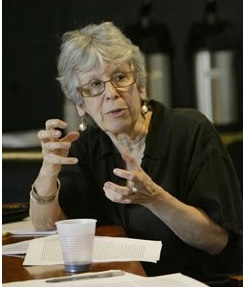 Professor Joan Wallach Scott has contributed to the formulation of a field of critical history since she wrote the classic article “Gender: A Useful Category of Historical Analysis” over 25 years ago. Today, Scott continues to inspire both the feminist and historical field of research.

Joan Wallach Scott is a Professor Emerita at the School of Social Science in the Institute for Advanced Study in Princeton, United States. She has written many books including Only Paradoxes to Offer: French Feminists and the Rights of Man (1996); “Parité: Sexual Equality and the Crisis of French Universalism (2005), The Politics of the Veil (2007) and The Fantasy of Feminist History (2011). She is also one of the founding editors of History of the Present, and has received many prizes. She has been recognized with honorary degrees from a number of academic institutions, including Brown University, Harvard University, and the University of Bergen (Norway).

In her latest research, Professor Scott has been concerned with the ways in which difference poses problems for democratic practice, and she has extended her work on the relationship between secularism and gender equality.

Her lecture is titled "Secularism and gender equality" and will be held on Thursday the 17th of September 13.15-15.00 in Lecture Hall D in the Social Science Building. The lecture is open for the general public to attend. The Department of Historical, Philosophical and Religious Studies and Umeå Centre for Gender Studies, who are the co-organisers, hope that there will be time enough for questions.