NEWS A fellowship from the Pulitzer Center on Crisis Reporting has brought science journalist Erica Andersen from New Jersey to Umeå University to report on research studying pharmaceuticals in water and their ecological consequences. 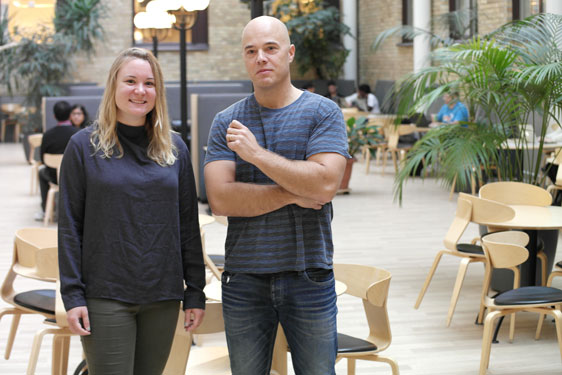 Andersen arrived in Umeå on Friday to follow Jonathan Klaminder and his colleagues at the Department of Ecology, Environment and Geoscience at Umeå University for one week. During this time, she has been conducting interviews and taking photos.

"It is an amazing experience to be able to meet the scientists in person and see the labs," Andersen said.

Andersen has a bachelor's degree in biology and classics. After working for three years, she began her graduate studies at Boston University in 2016 and received a master's degree in science journalism in September. During her coursework, she wrote an article about the ecological ramifications of pharmaceutical pollution in water.

“I first contacted the research team at Umeå University and conducted telephone interviews via Skype in March. I had read their recent publications and wanted to know more,” Andersen said.

Afterwards, she applied for a student fellowship from the Pulitzer Center to do more reporting and meet the researchers in Sweden.

"I feel honored to have received the fellowship. It's great to spend a week at the department, see the labs, and be able to interview many researchers and doctoral students,” she said. The articles she writes will appear on the Pulitzer Center’s website.

When asked to name something surprising about her time here, Andersen replied, "Fika is new to me. I think it's a nice way for people to meet, exchange ideas and get to know their colleagues.”

Before the Umeå stay, Erica Andersen was able to accompany Jonathan Klaminder to Abisko for a few days and attend the Climate Impacts Research Centre's annual conference at Abisko Scientific Research Station. Here she was able to talk with the researchers during the conference, on a hike up Mt. Nuolja and on the train trip down to Umeå.

"Abisko was incredibly beautiful. It was my first time in Arctic Circle and the first time I tasted fresh lingonberries. The landscape was completely different than anything I had ever seen,” she said.

On Sunday, a eight-hour flight will take her home to New Jersey, where Andersen now resides.