NEWS The restoration project ”Vindel River LIFE”, coordinated by Umeå University, is one of totally 28 EU LIFE-funded projects that has been nominated for the EU-prize ”The Life Award – Best of the Best Nature Projects”. ”It is a great honour for us to have been placed among the best projects in Europe”, says the project leader Johanna Gardeström. ”It is a nice support for our hard work during almost six years.” 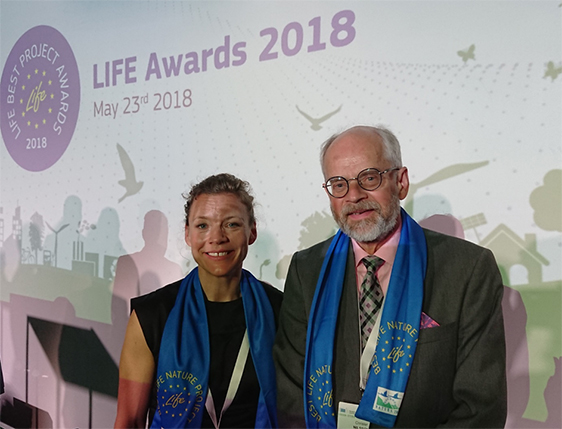 The project has restored 26 tributaries of the Vindel River after the damage caused by the timber-floating. The project has been owned and coordinated by Umeå University. The Ume/Vindel River Fishery Advisory Board has performed the practical work in the rivers whereas researchers at Umeå University and the Swedish University of Agricultural Sciences have studied the effects of restoration on riparian and aquatic environments. The recovery of vegetation and fish has been given special consideration. The Swedish Agency for Marine and Water Management has also taken part in the project as responsible for its final conference.

Using excavators, large amounts of coarse sediment (pebbles, cobbles and boulders) have been returned to the rivers, resulting in a gain of 27 hectares of river bottom along a total of 66 kilometres of river stretch. Furthermore, more than a thousand fish spawning grounds have been recreated and 20 dams have been removed. The project has experimentally replaced dynamited boulders with new boulders from surrounding areas. It is particularly the difference between these large-boulder reaches and more traditionally restored reaches that the researchers have studied.

”Our project has included a lot of administration, meetings, field work and information campaigns and interactions with many different people, along the Vindel River as well as in the rest of Sweden and in Europe”, says Johanna Gardeström.

The restoration has aimed at recreating the former floatways to their pre-timber-floating state. Therefore, the channelized floatways have been replaced by wide, complex river environments with a slow and varied flow.

”We already see signs of recovery among plants and animals”, says Christer Nilsson, coordinator of the project, ”but we believe that many more years are needed for the life in the rivers to reach the level it had before timber-floating.”

”The project has given us fantastic opportunities to continue follow-up studies of the ecological recovery, and other researchers as well as other projects have already benefitted from the restored reaches” says Christer Nilsson. ”Such an infrastructure of restored objects would never have been possible to build up using traditional project funding.”

Photo: Johanna Gardeström and Christer Nilsson in the projector light during the prize ceremony in Brussels.