NEWS New research has found that the number of plant species growing just next to restored streams can take up to 25 years to increase above those channelized during the timber floating era. This is according to doctoral student, Eliza Maher Hasselquist, and other researchers from Umeå University and the Swedish University of Agricultural Sciences (SLU), that was published in the journal Ecological Applications. 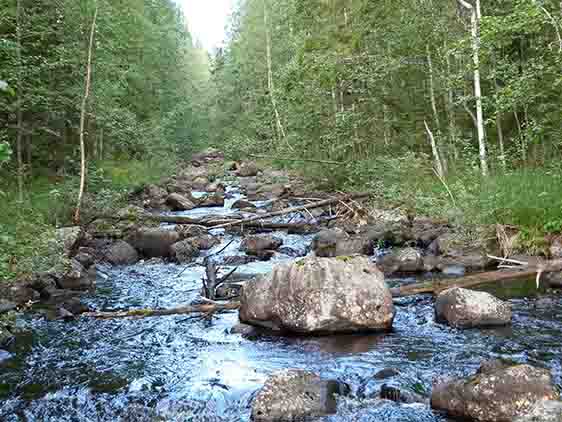 In the Vindel River catchment in northern Sweden, the main channel and most tributary streams were channelized from the 1850s to the 1950s to accommodate timber floating, which stopped in 1976. Boulders in the streams were blasted or pushed to the sides of the stream creating levees that disconnected the stream from the riparian zone. These streams began to be restored in the 1980s mostly for fish productivity, but these restorations have had impacts on other organism groups, particularly riparian plants. Riparian forests are important as they supply habitat, store carbon, provide shading, and filter water. These restorations have continued up through present day. This range in age of restored sites provided Eliza Maher Hasselquist and her colleagues’ a platform to study how fast stream communities recover with time after restoration.

“Northern Sweden is a great study system for determining the results of restoration because of the long history of restoration and the lack of urbanization. Most stream restoration in other parts of the world did not get started until the 1990s. So we have a unique opportunity to study the long-term effects of stream restoration,” says Eliza Maher Hasselquist.

Eliza and her colleagues counted the number of plant species in these streams and found that timelines for achieving species richness objectives in restoration plans should be extended to 25 years or longer. Eliza says, “The small number of studies of restored streams have often found inconclusive results after stream restoration and this may be because we are too impatient. These ecosystems took thousands of years to develop, and we expect them to return back to their pre-disturbance state in less than five years? We need to be more patient.”

Eliza and her colleagues suggest that to speed up recovery of the riparian zones, stream restoration practitioners should focus on making slopes next to the stream as gentle as possible and to expand riparian buffer widths to make the restoration to be as effective as possible.

“The Swedish government and the EU are spending millions of crowns every year on stream restoration. We should do everything we can to make sure that we get a good return on that investment. Finding simple ways of improving our methods for restoring streams is important for doing that,” says Eliza Maher Hasselquist.

Another option is to actively restore the riparian zones. Currently in northern Sweden, riparian zones are left to nature to bring the seeds necessary to repopulate restored riparian zones. Active seeding with native plants and planting of shrubs, like willow, could jump start recovery.

You can access the original article in Ecological Applications here:
http://www.esajournals.org/doi/abs/10.1890/14-1102.1

Eliza comes from the New Hampshire in the USA and is doing her doctoral work at Umeå University. Her husband is a researcher at SLU and his great-grandparents came from Sweden (hence the Swedish last name).