NEWS On Saturday 20 May, Bildmuseet celebrates 5 years on the Umeå Arts Campus. Two new exhibitions are opened, one of them beeing Roger Mettos Cryosphere, with paintings of magnificent mountain ranges and deep valleys rendered in an intense range of colours. 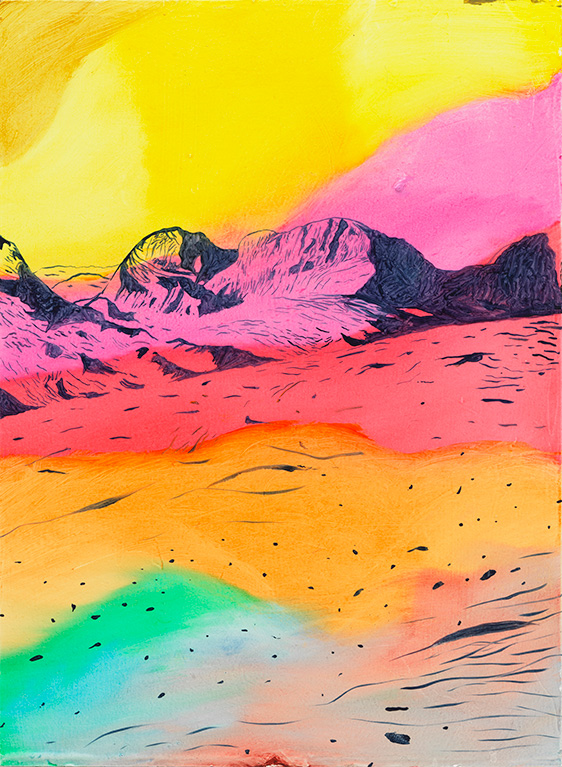 Welcome to a press preview on Thursday 18 May, at 10:00.  Roger Metto will give a presentation. (At the same occation, you will get a preview of the second upcoming exhibition: Jumana Emil Abboud / The Horse, The Bird, The Tree and The Stone.)

In a certain sense, Roger Metto is a landscape painter. His imagery, however, has both representative and abstract elements. Magnificent mountain ranges and deep valleys rendered in an intense range of colours, with features from the mountains of northern Sweden and the Rockies, more closely resemble dreamland geographies. If human figures or buildings appear, they are small and insignificant against the backdrop of powerful landscapes.

The paintings depict the wilderness and fantasies about great adventures with references to memories from the artist's early life in Kiruna, films he has seen, places he has visited or the smallness of humanity in the face of nature. In this exhibition, Roger Metto exhibits new paintings, most of them from 2017.

Roger Metto (b. 1964) grew up in Kiruna, Sweden. He lives and works in Stockholm. After studies at the Royal Institute of Art in Stockholm, he has had numerous exhibitions and public commissions. He is represented in several of the country's major art collections, including those of Moderna Museet, Gothenburg Museum of Art and Public Art Agency Sweden.

Roger Metto will be present, as well as Jumana Emil Abboud whose exhibition The Horse, The Bird, The Tree and The Stone will be presented at the same occation (please see the link above).

Jumana Emil Abboud and Roger Metto will give presentations of their exhibition.

The final weekend of the exhibition period, Jumana Emil Abboud will give a performance

Read more about the programme when Bildmuseet celebrates 5 years at the Umeå Arts Campus.