Secondary students contribute to research about youth and the net

NEWS Nine students from the International Baccalaureate programme at Östra Gymnasiet in Umeå have written chapters in two anthologies about young people and the internet, after being invited to contribute by researchers at Umeå University. A major American publisher will release both works in February 2011. 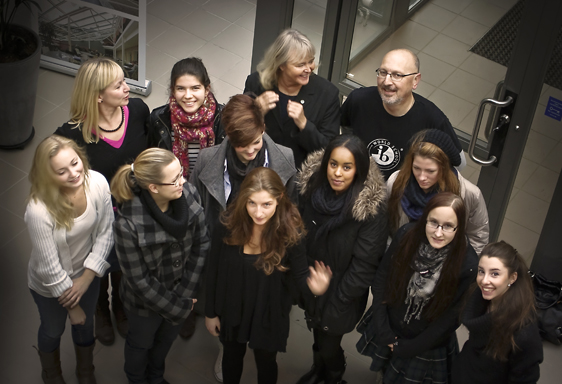 One of the researchers, Camilla Hällgren, explains how the idea came about.
-We were sitting in an editorial meeting struggling with how we would avoid falling into the usual trap of talking over the heads of young people.

The books consist of a series of chapters which researchers from all over the world have written. One contains chapters about how young people use the internet while the other deals with young people’s learning on the net. The researchers, Gun-Marie Frånberg, Camilla Hällgren and Elza Dunkels, who are editors and contributors to both works, chose to involve the young people right from the outset.
- There is a risk that we treat children as research objects. It’s easy to neglect the possibility of them being able to contribute important perspectives on the research, says Camilla Hällgren.

The students received short summaries of the other researchers’ chapters at an early stage, and were then given the opportunity to consider which ones they wanted to read more about, and what they themselves could contribute. Gun-Marie Frånberg describes the process.
- We deliberately gave them free rein because we did not want them to feel forced to write as adults. We were interested in their own thoughts, and their way of expressing themselves.

The editors are thrilled with the pupils’ contributions. In concise, well-written chapters they described how they use the internet and how schools deal with internet-related questions.- We were already pleased with how the books were going before we asked the students to participate, because we had managed to involve some of the most exciting researchers in the field, from all over the world. And the students’ chapters were the icing on the cake, Elza Dunkels explains enthusiastically.
-This is just the beginning! It’s not the last time we’ll involve students in our work, adds Gun-Marie Frånberg.

The students, who are now in the final year of their IB Diploma, wrote their chapters during the spring of 2010.
- We are very pleased that they took the time to do this, right in the middle of their tests and assignment deadlines, Elza Dunkels points out.

- It’s been exciting and stimulating. If the university is interested, I’d be happy to involve my students again in the future, says the students’ English teacher, Neil Gosser-Duncan.

The books’ titles are Youth Culture and Net Culture: Online Social Practices and Interactive Media Use and Youth: Learning, Knowledge Exchange and Behavior and will be published in February 2011.

Camilla Hällgren, Elza Dunkels and Gun-Marie Frånberg are all researchers at the Department of Applied Educational Science at Umeå University.