NEWS Established Aedes-mosquito population could spread the Zika virus in Europe this summer if infected travelers introduce the virus. An analysis of temperatures, vectorial capacity, basic reproductive number (R0), and air traveler flows suggests parts of Southern Europe may be at risk for Zika outbreaks between June and August. This according to a study, led by Umeå University researchers and published in the journal EBioMedicine. 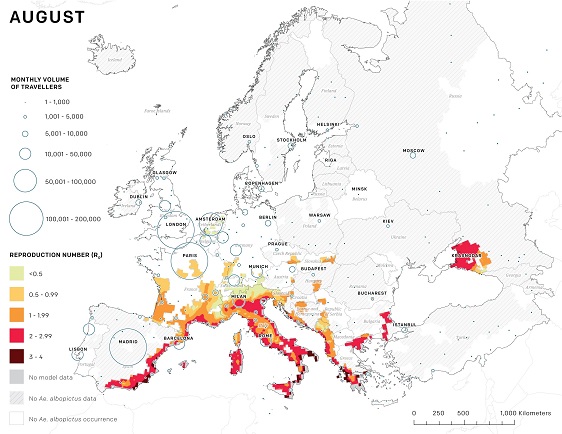 “We know warm climates create the kind of conditions suitable for mosquito-borne illnesses to spread,” says Joacim Rocklöv, researcher at Umeå University’s Unit for Epidemiology and Global Health and co-author of the article.

“Vectorial capacity depends on a number of parameters but in general, warmer temperatures increase the rate in which the female mosquitos bite, the mosquito virus reproduction, and their virus transmission risk. The presence of established Aedes mosquito populations, the warmer climate and the coinciding peak flow of air travelers into Europe, is a triage making Southern Europe fertile ground for Zika.”

Following a similar epidemiological study conducted on the similar dengue virus, the group of researchers led by Joacim Rocklöv at Umeå University, used a temperature dependent computer model to predict Zika virus infection risks for Europe. The research exploration was undertaken in close collaboration with the European Centre for Disease Prevention and Control (ECDC). In the analysis, the researchers overlaid data on monthly flows of airline travelers arriving in European cities from Zika-affected areas, data on month-by-month estimates of virus infection reproduction capabilities of Aedes-mosquito populations in Europe, and human population data within the areas where mosquito-borne transmission of the Zika virus could be possible.

The main findings, presented in EBioMedicine, a journal initiative integrating the Lancet and Cell, are:

The risk assessment assumes that European Aedes-mosquitos have the same potential to spread the Zika virus as their South-, Middle- and North American counterparts.

Earlier research has shown that increasing temperatures will enlarge Europe’s seasonal window for the potential spread of mosquito-borne viral disease and expand the geographic areas at risk for epidemics to include large parts of Europe. The threat includes tropical and sub-tropical viruses such as Zika and Dengue.

Read a digital publication of the article in EBioMedicine