Swedish Picture Book of the Year 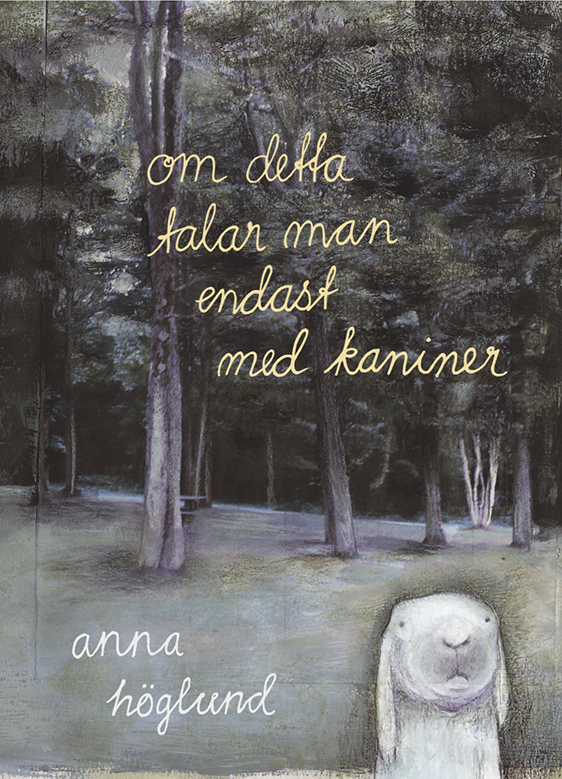 Om detta talar man endast med kaniner (Of which you only talk with rabbits) was named Swedish Picture Book of the Year, and awarded the national prize Snöbollen. Anna Höglund, who both illustrated and wrote the book, received the prize in March 2014 during Littfest - Umeå International Literature Festival.

Om detta talar man endast med kaniner is aimed at teenagers and adults. It is a story of alienation, sensitivity and the dark thoughts that accompany growing up. Through poetic text and illustrations that combine collage techniques, photography and painting, Anna Höglund depicts a young person’s experience of being different and of not quite feeling comfortable with herself.

The jury’s motivation for Snöbollen – Swedish Picture Book of the Year 2013:
“Anna Höglund has created a picture book story that does not underestimate its readers. Through poetic text and powerful images she draws us into a young person’s insecure existence. Images referencing works by other artists add dimension to this tale of alienation, extreme sensitivity and the reality of growing up. It is a magnificent and courageous work that demonstrates the capacity of the picture book to speak to readers of all ages and is, in all its formal aspects of design, paper and print, a truly aesthetic experience.”

Read more about the award Snöbollen – The Swedish Picture Book of the Year.

Anna Höglund is one of the country’s foremost picture book artists who have published many books since her debut in 1982. She was born in 1958, and lives and works in Stockholm. She writes and illustrates her own books, makes animated films and writes dramas. She has also illustrated the texts of several other authors. Among her earlier titles are Först var det mörkt (First There was Darkness), Syborgs förbannelse (The Curse of Syborg), Vad säger klockorna? (What Does the Clock Say?) and the series about Mina and Kåge.

She has received several awards for her work: The 1988 Elsa Beskow Plaque for Jaguaren (the Jaguar), the 1994 Deutscher Jugendlitteraturpreis (the German Children’s Literature Award) for Kan du vissla Johanna? (Can You Whistle Johanna?), the 1996 August Prize for Min syster är en ängel (My Sister is an Angel) - all three works were collaborations with Ulf Stark -  and the 1997 Expressen “Heffaklump” Prize. In the spring of 2014, she received the prize Snöbollen – Swedish Picture Book of the Year for Om detta talar man endast med kaniner.