NEWS The High Performance Computing Centre North (HPC2N) in Umeå has one of the fastest research computers in Europe and has both Linux and Windows operating systems installed. Its computing power corresponds to almost 3,000 interconnected personal computers. 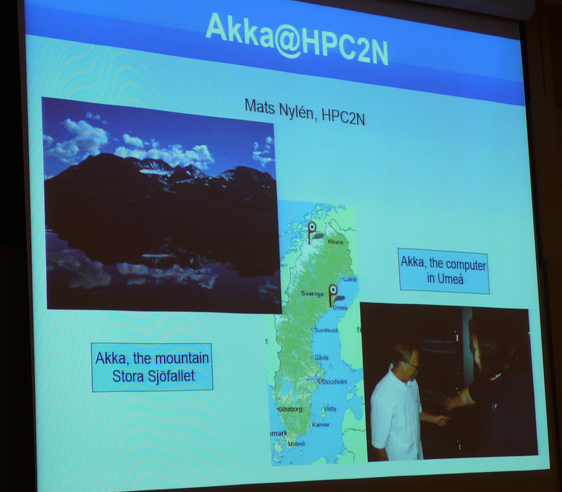 The supercomputer is known by the name of Akka and can carry out 46 billion computations per second or 46 teraflops. This corresponds to 85 % of the theoretical top performance. At the time of its installation in June 2008, Akka was ranked number 39 in the TOP500 list of the 500 fastest supercomputers in the world. In addition, it is the first supercomputer in Sweden which uses both Linux and the Windows HPC 2008 operating system. As such, the Akka system is currently ranked number one in Europe and gives new user groups access to supercomputer capacity.

The operation and cooling of the new supercomputer requires less electricity than other supercomputers. In November 2008, it was placed among the 20 leading supercomputers in the world with regard to energy efficiency in the latest Green500 list.
– The selection of processors with low output and the very energy-efficient design of our new computer hall is an indication of our ambition to become an environmentally aware computing centre, Professor Bo Kågström, Director of HPC2N, says.

The system is supposed to be used primarily for computations and computer simulations in a number of different fields of application, e.g., space research, materials research, bioinformatics, theoretical physics and chemistry, as well as engineering sciences. In addition, Akka is used for teaching in computing science and Master of Science Programmes in Engineering, as well as in collaborations with industry.