The reindeer counteract the effects of climate warming

NEWS One of the consequences of a warmer climate can be that lowland and southern plants migrate higher up in the mountains. Ecologist Elina Kaarlejärvi shows in her thesis that reindeer, voles and hare can prevent these invasions. The public defense will take place at Umeå University, 21st of February. 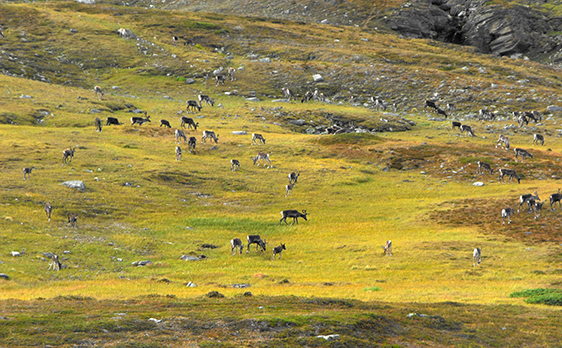 Elina Kaarljeärvi concludes that climate warming does not always automatically lead to increased plant biomass, invasions of new species and shrubification in tundra, opposite to previous predictions.

–Typical lowland plants, which I planted out to the open tundra, for example Red campion and Fireweed, were eaten by reindeer. Plants in open tundra are typically small, and therefore taller and more nutritious lowland plants become easily detected and eaten, says Elina Kaarljeärvi.

– This shrubification together with new species migration to open tundra would increase competition among plant species and thus threaten the existence of low-stature tundra plants. My results from a field experiment in Abisko, in northern Sweden, indicate that reindeer grazing may protect the original tundra vegetation by keeping the vegetation low and preventing new species’ invasions to the tundra.

Another experiment was carried out in Kilpisjärvi, Finland, where Elina Kaarljeärvi used mini greenhouses and fences against herbivores to study interaction of climate warming and grazing. Other two sub-studies took place in Dovrefjell and Finnmarksvidda in Norway.

Elina Kaarljeärvi’s results highlight that herbivores, especially reindeer, are key species and play an important role in the mountains.

- Changes in mountain vegetation depend on local reindeer numbers. Moderate grazing prevents new species upward shifts and reduces the growth of vegetation. Reindeer numbers vary significantly between different areas and different years. So we can expect more rapid changes due to climate warming in vegetation in the areas that are not grazed.

Elina Kaarlejärvi grew up in Finnish Lapland and studied biology at the University of Turku, Finland.

Elina Kaarlejärvi, Department of Ecology and Environmental SciencesTelephone: 00358-50 560 8667E-mail: elina.kaarlejarvi@emg.umu.se
The thesis has been published digitally