Umeå Pride 2014 gets a head start at Bildmuseet

NEWS How can an anti-democratic system be outwitted, just as certain stories are not given legal space? What are the conditions for artists working with LGBT issues, feminism and power? On Tuesday starts Umeå Pride 2014 with a conversation about art activism, free speech and refugee politics at Bildmuseet. 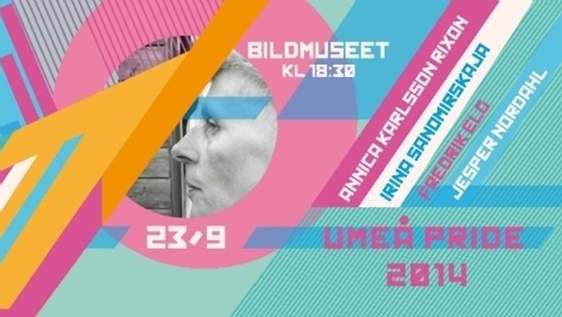 Annica Karlsson Rixon tals about Art in Motion with Russian LGBT activism. This is followed by a roundtable discussion addressing questions such as: How is the queer feminist contemporary art managed and renewed? What does exile possibilities and impossibilities look like for those who left the country and for those who stayed? Does Umeå want to become a haven for artists in exile?

The participants are available for interviews with the media an hour before the event.

Annica Karlsson Rixon is an artist and currently a doctoral student in the department of photographic arts at Valand, University of Gothenburg, with her art project State of Mind. The starting point is a record of the queer environment in St Petersburg, Russia, with a focus on the life situation and the political situation of lesbian and bisexual women. Karlsson Rixon reflects on art's possibilities and shortcomings for participation in activist movements.

Irina Sandomirskaja is professor of cultural studies at CBEES (Centre for Baltic and East European Studies) at Södertörn University. She earned her PhD in 1992 in Moscow, participated in the feminist art activism in Russia and is working in Sweden since 1996. She researches in literature, film and critical cultural theory, language, power, history, and writing. Among other things, she has written about the feminist punk collective Pussy Riot and actively contributes to magazines such as Glänta and Baltic world.

Fredrik Elg initiated ICORN-sanctuary program on cultural management in his hometown Malmö in 2010. He was later asked by the Swedish Arts Council to compile a handbook for Swedish sanctuaries. After two years as project manager for the refuge program at the Arts Council, he is responsible for the launch of Malmö's second refuge program. This time for persecuted musicians.

Camilla Påhlsson is artistic director at Konstfrämjandet but also an interdisciplinary artist who works mainly with social projects related to hbtq-, sexuality and identity issues. She has driven major art projects as a project manager/curator where art meets society, (cultural) politics, power and gender. She has, among other projects, produced a large-scale performance piece titled Back in Baby's Arms by artist Elin Lundgren.

The event is part of Umeå Pride 2014 and organized by Konstfrämjandet and Bildmuseet in collaboration with Queerförvaltningen, Lesbisk makt, ABF, Havremagasinet, Umeå Municipality and Umeå2014.