NEWS On 2 March 2016, the Centre for Sami Research Board appointed Christina Allard the tenth recipient of the Vaartoe/Cesam Scientific award. 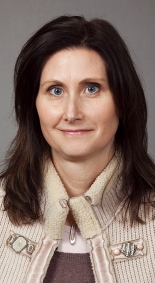 In her work, Christina Allard connects Nordic Rights of Indigenous Peoples with an international context, and has hence contributed in the development and challenge of the understanding of and impression of the rights of indigenous peoples in both Sápmi and in other parts of the world.

Her international commitment, strongly connected to research on indigenous peoples in a series of countries, makes her research relevant also outside of the own national research context.

Christina Allard completed her doctoral dissertation in 2006 entitled Two Sides of the Coin, which is a comparative legal study of three indigenous peoples; in Sweden, New Zealand and Canada.

Since she earned her doctoral degree, she has published a number of important publications, of which the book Renskötselrätt i nordisk belysning (approximate English translation: The reindeer-herding right from a Nordic perspective) from 2015 is of great scientific importance and the understanding of reindeer-herding regulations in Norway, Sweden and Finland.

Apart from her extensive scientific publication, Christina Allard has participated actively in both public debate and in an active work deeply-rooted in Sami parties, educational departments and organisations have taken part in contributing to her continued scientific work.

Christina Allard has contributed greatly to Sami research and her work has spread across both Sápmu and international indigenous contexts, which is one of the reasons she is a well-deserving recipient of the Vaartoe/Cesam Scientific Award 2016.

The award is SEK 25,000 which will be presented at the Umeå University annual Spring Graduation Ceremony on 21 May 2016.

Christina Allard is active as Assistant Professor of Law at Luleå University of Technology and at Uit The Arctic University of Norway in Tromsø.

Read more about Christina Allard at Luleå University of Technology.