When, where and how is ice formed in northern streams?

NEWS Ice formation is important in northern streams with long winters as it affects plants and animals in various ways. But knowledge on variations in ice formation processes has been inadequate. Former doctoral student, Lovisa Lind, at Umeå University, has created a model for ice formation that can be of use to nature conservationists, technicians and researchers in the northern hemisphere. 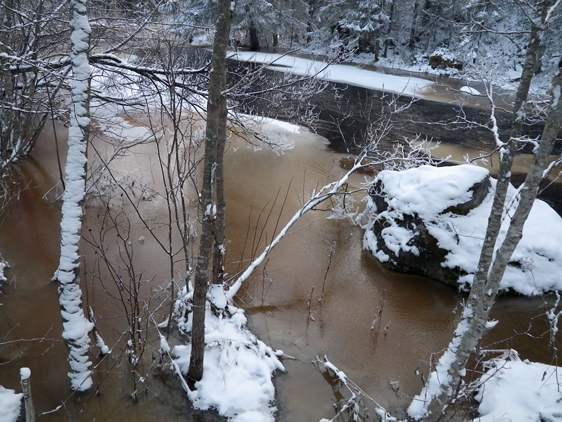 Smaller streams in northern areas can have their highest water levels in winter. This stream has been dammed by an ice jam, the water has flooded the riparian zones and frozen. Such processes can lead to large changes in the vegetation. Photo: Lovisa Lind.

“In previous models for ice formation, the precipitation and channel heterogeneity have played key roles, but this does not fully apply to the small streams in the north. Here, even more factors are important,” says Lovisa Lind.

In autumn, the water loses its heat because of the cold air and it leads to the formation of ice. In a small shallow stream, the water cooling is faster than in a large, deep river, all other factors being the same. This provides different opportunities for ice formation.

“We studied 25 reaches in 19 small streams in the forest landscapes in Västerbotten and found that both climate and soils are important for when and how ice is formed,” says Lovisa Lind.

In calm reaches, ice formation often starts along the stream edges. Following the development of the winter the ice cover grows until it eventually covers the entire channel. In the inland region, where streams flow at high altitudes, such ice is favoured by logs and big boulders in the water, low water temperatures, many cold days and low inflow of groundwater. The importance of location depends on the fact that temperatures decrease and the fall increases with altitude, and the substrate is coarse. Streams near the coast are often hit by thaw in mid-winter and therefore have a more erratic ice formation.

In rapids, where water is fast and turbulent, there is water mixing leading to fast cooling. Then, small ice particles called frazil ice are formed. Such ice easily sticks to objects. Often frazil ice can build up thick ice covers on stream bottoms, anchor ice that is. If the rapids are located downstream of a lake outlet, ice formation is delayed or does not happen because lake water has a warming function. This means that steep rapids located far from a lake outlet has a large tendency to form anchor ice.

“The distance between a stretch of rapids and a lake outlet can therefore indicate how appropriate an area is for developments and restorations,” says Lovisa Lind.

Sometimes anchor ice becomes so thick that the stream is dammed and overflows its channel in the middle of winter. Then the water level can become higher than during the spring flood and even more ice is formed when the dammed water freezes. Along some small streams the riparian zones got filled with ice up to seven metres from the channel.

When an ice dam eventually breaks and the dammed water is released, the water level sinks fast and the ice in the stream can remain hanging along the edges. When such ice loses its hold it often breaks the riparian vegetation apart.

“Impact on vegetation and stream banks is evident along reaches with winter floods. In general, such ice formation is important for riparian biodiversity. In contrast, large accumulations of anchor ice can harm fish in the streams,” says Lovisa Lind.

Based on the new findings the researchers have formed a model that describes the likelihood of different types of ice formation in small streams in coniferous forest regions. The model provides guidance on how streams can be managed and how vegetation can develop when streams are restored.

Christer Nilsson, professor at the Department of Ecology and Environmental Science
Email: christer.nilsson@umu.se

Please send an email to book time for a phone call.