Amyloid formation - from molecular mechanisms to disease and novel nanomaterials

Research project Which molecular and cellular mechanisms underlie the pathology of such devastating diseases as Alzheimer’s and Parkinson’s diseases and many other amyloid disorders?

Protein self-association into amyloid oligomers and fibrils and their deposition in the body is a hallmark of a number of human pathologies including Alzheimer's and Parkinson's diseases, Skellefteå disease, diabetes mellitus and others. We study in depth the multiple faces of this phenomenon, including structural and regulatory mechanisms governing amyloid formation in vivo and in vitro, cytotoxicity of amyloids and misfolded protein complexes towards normal and tumor cells, immune response to them in the biological fluids of Alzheimer's and Parkinson's disease patients as well as the applications of amyloids as novel nanomaterials in nanobiotechnology. 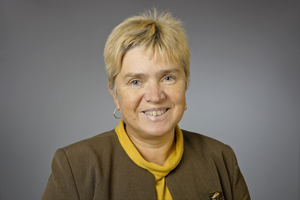 Department of Medical Biochemistry and Biophysics

Ordered protein aggregation known as amyloid formation has recently emerged as a universal phenomenon due to extensive research in protein folding and amyloid diseases. The amyloid is viewed as a generic structure characterized by cross-ß-sheet formation in its core, which implies that any polypeptide can adopt this conformation under amyloid-prone conditions. Amyloid deposits are involved in a wide range of human pathologies, including Alzheimer's and Parkinson's diseases, diabetes mellitus, systemic amyloidoses and others.

The amyloids represent also a new challenge to the industries which rely on proteinaceous products such as biopharmaceuticals. The potentially hazardous properties of amyloids demand the highest attention and in depth analysis in order to provide safe and sure products. Some other properties of amyloids, such as their remarkable physical stability, can be applied in nanotechnology for fabrication of novel nano-sized structures with controlled parameters. The cytotoxicity of proteinaceous complexes can also be used as a two edged sword, depending on the conditions either killing normal cells or inducing death of unwanted tumor. Our research interests are focused on the studies of the molecular and cellular mechanisms of amyloid formation of disease-related and de novo designed proteins. Specifically, we address the following questions:

1) Structural characterization of amyloid assemblies with particular focus on the early events in fibrillation process. Inhibition and reversal of amyloid formation. A state of the art atomic force microscopy (AFM), a range of biophysical and biochemical techniques are applied.

2) Revealing molecular and cellular mechanisms of amyloid toxicity, which involves identification of the toxic amyloid species and determination how they cause cell damage and death. Analysis of the apoptotic activity of proteinaceous complexes towards tumor cells.

3) Studies of ex vivo amyloids and evaluation of autoimmune responses to amyloids in biological fluids of patients with Parkinson's and Alzheimer's diseases.