Research project In this project we developed a walking aid for people with cognitive disorders that make regular walkers hard to operate.

Our walker detects and avoids regular obstacles (e.g. door posts) and negative obstacles (e.g. curbs). The project was coordinated by Thomas Hellström at UMU, and in collaboration with co-applicants Per Wester from Umeå Stroke Center and Olof Lindahl from CMTS MT-FoU at University Hospital of Umeå. One major outcome of the project was a Swedish patent SE535373 C2.

Current demographic trends in the Sweden and worldwide show a significant shift from societies where most people are relatively young to societies where most people are relatively old. A major concern for aging adults is the decline in physical mobility and resulting reduced independence in homes and communities. The rollator is a very common mobility device and is used by approximately 0.7% of the population (statistics for US in the mid 1990’s). Corresponding statistics for Sweden show almost 4%. In Sweden, approximately 55.000 new rollators are sold every year.

While rollators clearly improve balance and mobility, a large proportion of users have difficulties using their devices, leading to increased risk of falling. More than 47.000 accidents related to falls associated with rollators and canes occur each year in the US. Apart from direct costs related to the accidents, increased and safer usage of rollators may delay transition of the elderly people to nursing homes. An average delay by one month is estimated to save almost $2.2 billion in US alone (1995). Hence, technical improvements of safety of rollators can lead to considerable cost savings for the society, as well as to increased independence for our aging population. 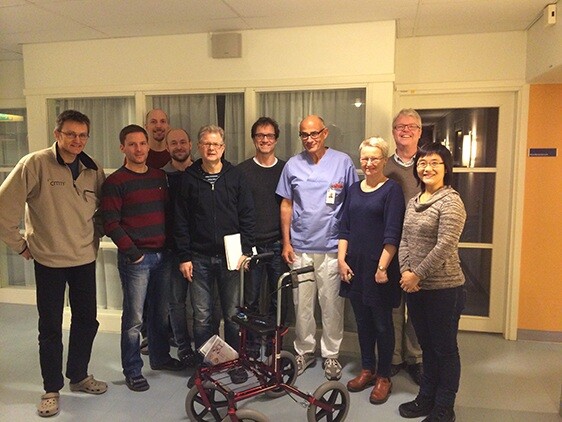 The developed solutions was a retrofit to a commercial four-wheeled rollators with two castor wheels in the front and two regular wheels in the rear. The added equipment comprises an embedded computer of type Arduino, two electrically controlled brakes, and a series of sensors. The sensors are used to detect obstacles and direction of motion, and brakes are used to influence the direction of motion as described below.

Propulsion and turning of the rollator is normally totally under the control of the user. The control program affects direction of motion indirectly by short activations of one of the brakes mounted on the two the rear wheels. One tested solution for the brakes is electromechanical solenoids that push a metal piston against the rubber part of the wheel in an on/off fashion. 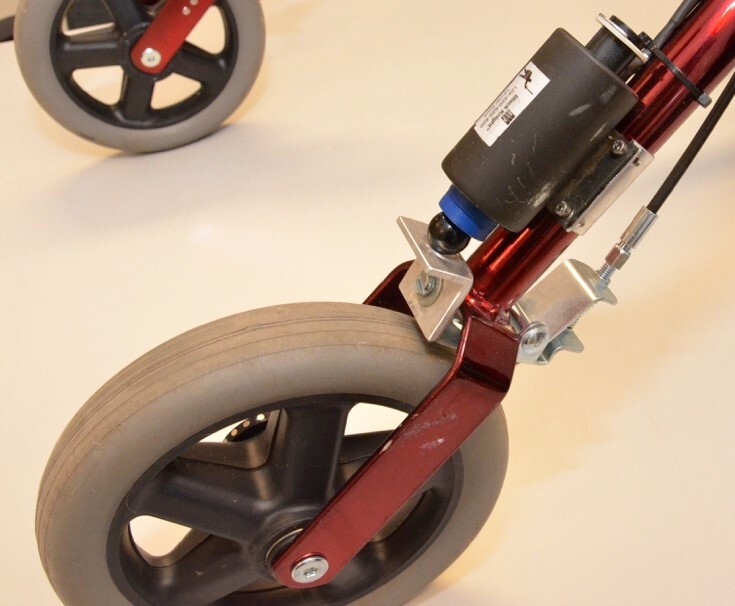 Another tested solution uses drum brakes and servos mounted above each rear wheel. The servos make it is possible to control how hard the brake operations should be. 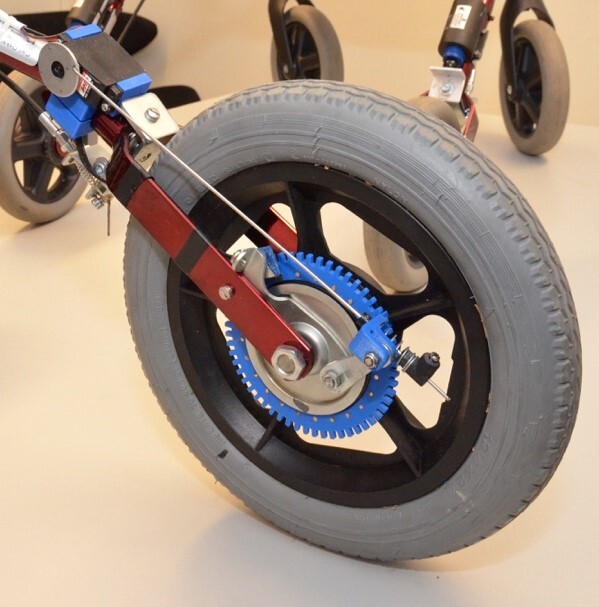 Activation of the brake on one side causes a turn in the same direction when and if the user proceeds by pushing the rollator forward. The front castor wheels will then automatically turn, such that the motion of the rollator is changed in the desired direction, even when the brake is released. The brake power is adjusted such that the affected wheel rotates slower, rather than stopping completely. The design principle is to assist the user by suggesting and initiating turns, rather than taking over control of the rollator. Furthermore, the control algorithm for activation of the brakes makes sure that the brakes are not activated too often, and also not for too short or too long periods. Also, activation of brakes is only allowed when the rollator is moving forward. These additional control rules contribute to a better user experience by minimizing the interference with the user’s normal operation of the rollator.

Detecting and avoiding objects and curbs 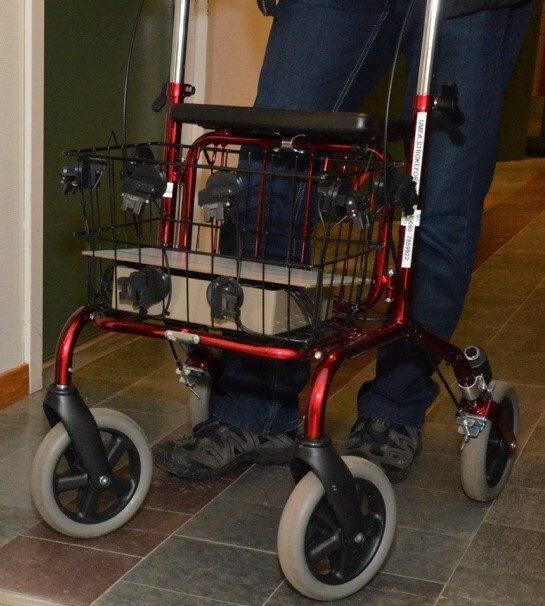 The rollator is equipped with a number of infrared sensors for detection of obstacles. Each sensor emits an infrared light beam, detects possible reflection, and estimates the distance to the object causing the reflection. The sensors are mounted at different positions and point in different directions, such that obstacles can be detected with sufficient coverage and accuracy.

The basic functionality for obstacle detection and avoidance has been tested at Umeå Stroke Center at Umeå University Hospital. Tests on a standardized path with obstacles were conducted in stroke patients and healthy subjects with blurry goggles with the rollator intelligence randomly switched on and off. Both stroke and healthy subjects with blurry goggles walked faster with intelligence off. All stroke patients had a positive perception of the the rollator, and raised own suggestions for improvement. Three out of five stroke subjects had more detected obstacles with intelligence on. This might imply enhanced safety during walking.