Research project This project aims to increase the knowledge about how body function is influenced by stroke. We analyze general movement ability in detail with an advanced high-speed camera system and map brain activity while simultaneously recording the ability to perform individual finger movements.

A stroke causes an injury to the brain. Our research aims to increase the knowledge about how body movements are influenced by stroke due to the brain injury. Clinical tests of body function after a stroke report what a person can do without explaining why a task is difficult to perform. We use a motion capture system to analyze hand, arm and upper body function as well as gait in a movement lab. Via functional brain imaging synchronized with motion cameras, we also investigate brain activity during individual finger movements. Our goal is to increase the understanding of how changes in brain activity relate to changes in body function after a stroke, in order to develop better clinical functional tests.

Department of Community Medicine and Rehabilitation, Faculty of Medicine 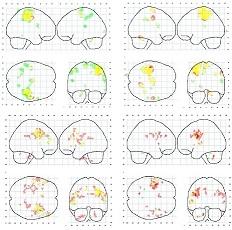 Brain activity maps in an MR scanner from a control subject (upper panel) and a subject with stroke (bottom panels) during left and right hand’s finger motions with thumb motion (DIG1) as baseline.

Reliable and sensitive analysis methods that enable quantification of body motion are required in order to analyze body function after stroke and assess related rehabilitation strategies. Current clinical functional tests mainly report if a person can complete a task and how long it takes. There is also a lack of specific knowledge about how recovery after a stroke progresses and in what way brain damage leads to reduced body function. After stroke, some reorganization of affected functions occurs in the brain, but the degree and consequences of such is still unclear. Functional magnetic resonance imaging (fMRI) synchronized with optical motion cameras can give insights into relationships between activity patterns in different brain areas and the individual’s movement capacity. Further, structural connectivity analyses coupled with the cortical activity patterns observed during finger movements offers an insight into how the brain, both structurally and functionally, has responded to the stroke.
The aim of this project is to investigate the relationships between clinical and laboratory-based tests of arm, hand and upper body function after a stroke, and to relate brain activity to the ability to move fingers individually.
Methods: 35 participants diagnosed with stroke (caused by infarction or hemorrhaging) are recruited from the University Hospital of Umeå (NUS). Inclusion criteria are remaining affects in one arm/hand at least 3 months after hospitalization, medical stability, certain voluntary movement ability in the arm/hand (can lift the arm and/or hand from a surface), ability to walk a short distance indoors without aids, and capable of understanding both auditory and written information. Persons with other illnesses/disabilities which affect movement capacity in the arms and/or legs are excluded. For the fMRI study, participants are excluded if they have metal in their body, which can cause a risk for the person, tattoos on the shoulder/back, and/or claustrophobia. Age- and gender-matched controls are recruited via advertising, leisure societies, relatives and friends.
Arm and hand function of the participants are measured by clinical assessment methods and laboratory-based motion analysis. For the latter, a high-speed camera-based motion capture system registers the positions of 44 passive reflective markers, which are affixed to the body with double-sided adhesive tape on specific anatomical landmarks. Two video cameras and two multicomponent force plates, which register ground reaction forces during gait, combine to provide an advanced movement analysis system (U-Motion Lab, Physiotherapy, Umeå University).

Subgroups of 24 subjects each also participate in a study on brain activity coupled with the ability to move fingers individually. These participants perform individual finger movements seated in a motion laboratory, with and without visual feedback from their own hands. They also perform this finger test lying in an MR scanner while brain activity and finger movements are recorded simultaneously (Umeå center for Functional Brain Imaging, Umeå University).
Knowledge contribution: This research enables an improvement of today’s clinical tests of particularly arm and hand function after stroke. A deeper understanding of the mechanisms regarding recovery after stroke facilitate customized rehabilitation strategies.