Research project We have studied fullerenes since 1991, gradually changing the emphasis from basic studies of pure fullerenes to synthesis and analysis of fullerene polymers. At present, and in the near future, we study doped fullerenes and carbon nanotubes, including nanotube "peapods".

We are trying to create light, strong materials from carbon nanotubes and fullerenes, either by direct linking of nanotubes or by producing composites from nanotubes and polymers or metals. We have long been able to bond fullerene molecules together to form fullerene polymers, and we have now also successfully carried out this process inside carbon nanotubes, to produce long chains of fullerene polymers. In this project we will develop this process, adding other chemicals to the fullerenes inside the nanotubes. We will also try to use high pressure to react nanotubes, forming new strong materials. 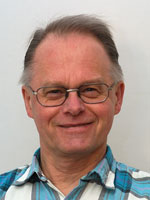 In 1985 it was discovered that pure carbon can exist in the form of a molecular solid, "buckminsterfullerene". We now know that pure carbon can form both quasi-spherical molecules, fullerenes, and cylindrical ones, carbon nanotubes. In this project, both these types of material are studied.

Carbon nanotubes are the strongest molecules known, at least 100 times stronger than steel per unit weight. It would be desirable to use these materials for constructing buildings or bridges, or for designing light-weight airplanes, cars, or trains. However, because intermolecular forces are weak, nanotubes form only weak, porous, web-like structures of little use in technology. A very intense international effort is carried out to find ways to bond nanotubes to each other, but since carbon is a very inert material this has not been very successful so far. The most common way to use nanotubes is still to mix the nanotubes into a metal or polymer matrix to form a composite, but so far these composites are not much stronger than conventional materials.
Carbon nanotubes and fullerenes can also be "doped" by metal ions into a metallic state, and the fullerenes can even turn into high-Tc superconductors in this way. Carbon nanotubes are also often intrinsically good conductors, showing close to superconducting properties ("ballistic conduction"), and they are of very large interest for future applications in electronics. Experiments also show that carbon nanotubes form very efficient electrodes in lithium batteries, increasing present battery capacity by a factor of two.

Within this project we intend to continue our studies of the properties of carbon nanotubes and doped fullerenes, but also to study composites of these materials. We are particularly interested in the high pressure properties; temperature changes the populations of electrons and phonons in different energy states, while pressure gives more basic changes of the energy levels themselves. Most properties thus change significantly under pressure.
We have already studied pure nanotubes, fullerenes, and fullerene polymers in detail, and we are at present trying to determine the pressure dependence of the band gaps in a series of spontaneously polymerizing alkali metal doped fullerene compounds. Very recently we have also investigated Rb4C60, and discovered that a previously reported insulator-to-metal transformation does not actually exist.
For our future work we are particularly interested in the mixed nanotube-fullerene materials. One interesting area is based on fullerene-filled nanotubes, called "peapods" for obvious reasons. Peapods can also be doped, and very recently we have also shown that the fullerenes inside can be dimerized or polymerized into long, covalently bonded chains under high pressure. We intend to add other organic molecules inside the peapods to see if we can create other, even more interesting materials and structures.
Another sub-project is to react the carbon nanotubes with each other to create covalent intermolecular bonds. This has already been made by adding reactive side-groups to the tubes, but such drastic modifications tend to damage the structures and thus decrease the molecular strength. We hope to be able to use high pressure treatment in combination with less reactive additions to bond the nanotubes in a more gentle way, which hopefully will still result in the formation of a strong, light-weight construction material.