He comes from Spain, but has lived in Umeå for almost six years. This is where he and his research associates work hard to learn all about microorganisms. They have already come a long way.

Felipe Cava is a senior lecturer in infection biology at the Department of Molecular Biology and his also affiliated at The Laboratory for Molecular Infection Medicine Sweden (MIMS). He and his colleagues are searching for knowledge that will lead to new antibiotics and improved methods to fight infectious diseases.

“These days, I spend more time on administrative tasks, as I spend a lot of time applying for grants, but I’ve learnt to observe and enjoy science through the eyes of my colleagues.”

Cava is pleased to have recently received two major grants from the Swedish Research Council. The first was for SEK 25.2 million and then SEK 10 million, for the respective projects titled "Membrane microdomain disassembly in Staphylococcus aureus inhibits MSRA antibiotic resistance" and "What regulates the bacterial cell wall homeostasis?”

Felipe Cava grew up in Madrid, Spain, and already as a teenager, knew what he wanted to work with. His parents had not studied at universities, but gave all six children the chance to study. His siblings have taken that opportunity and achieved great success in the professions they chose.

When I was 14 years old, I became inspired by my teacher’s love for biology

Enthusiastic and knowledgeable teachers and mentors have made Felipe want to continue to be more engaged in microbiology.

“I love science and I knew that’s what I wanted to spend my time on. When I was 14 years old, I became inspired by my teacher’s love for biology. When I arrived at Universidad Autónoma in Madrid, Professor José Berenguer had a big influence on me.”

Felipe was responsible as a student, but during his third year, he was given the opportunity to work in Professor Berenguer's lab during the evenings and nights, until he graduated and could start his postdoctoral studies.

“I was then forced to decide if I wanted to reach for the stars in my research. I did a postdoc with Professor Matthew at the Waldor Lab at Harvard University in the US. Waldo has been the most influential person in my research career.” 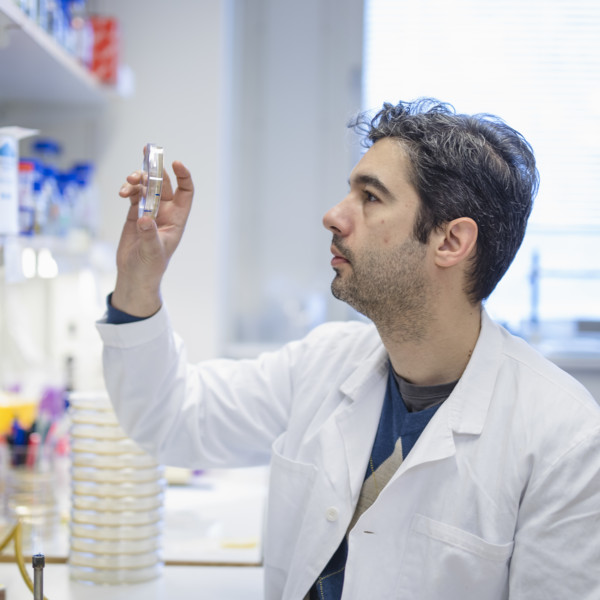 Felipe discovered that many bacteria released D-amino acids to the environment.

Felipe discovered that many bacteria released D-amino acids to the environment, a molecule that seems important in many processes in terms of bacterial physiology and microbial ecology.

In a record two and half years, he was first author in three articles in prestigious journals such as Science and EMBO J.

He moved back home to Spain, but times were tough due to the financial crisis and it was nearly impossible to tenure, even as associate professor. That was when a previous encounter with Bernt Eric Uhlin from MIMS at Umeå University made a crucial impact on Felipe Cava's continuing career.

“I had held a speech at an international summit and met Bernt Eric Uhlin. He wondered if I would consider coming to Sweden, but I had just moved back to Spain from the US and though I had the best job.”

Just to be sure, Felipe Cava checked out which opportunities existed for a young researcher in Sweden. He then received two grants in tough international competition, both as the Wallenberg Fellow and at MIMS. In addition, there was resistance from his Spanish employer was keen on keeping him stay Madrid.

“They had a good programme, but in Spain it was difficult to get SEK 100,000 for my research, whereas I received SEK 3 million right away and also had 18 research colleagues. So I had to take the chance!”

Felipe Cava demonstrated that he belonged to the global elite and now has a permanent position, leads a successful lab with 15 people and has secured funding for the upcoming six years.

Besides his own research, he also holds courses, trains teachers and holds motivational talks to medical students.

In addition to the large grants, he has also received the Erik Fernström Award, which is given to promising and talented young researchers. In Spain, he received 2017 The Jaime Ferran Award.

He is currently conducting research on cell wall mechanisms at the molecular level, studies the bacterial cell wall of the bacterium to see how microbes - organisms too small to be seen with the naked eye - adapt to different environments.

Felipe Cava has now lived in Sweden for six years and is planning to stay. He enjoys being outdoors in nature and running, especially long distance. So it is probably good to have a scientist's patience.

“The aim is to develop new antibiotics that work better. There are always new hypotheses and more work to take on.”

Does: Works at the Department of Molecular Biology at Umeå University and leads a lab of 15 people

Favourite food: All types of cheese with a glass of good wine

Felipe Cava has been awarded the 2018 Fernström Prize at Umeå University. His research group studies how bacte...