Emmanuelle Charpentier: "I really miss the atmosphere at Umeå University"

FEATURE Emmanuelle Charpentier's Nobel Prize in Chemistry is truly historic for Umeå University. It should be celebrated. And it certainly was – corona-safe and with candor.

If everything had been as usual, thousands of pieces of cake would have been ordered and there would have been a big party to celebrate the Nobel Prize for the discovery at Umeå University. However, there is an ongoing pandemic and restrictions for large crowd gatherings. But it is unquestionable that a Nobel Prize must still be celebrated.

There will be a time for larger celebrations.

The best solution was to arrange a corona-adapted variant. Two days after the awarding of the Nobel Prize, a maximum of 50 people gathered in the Rotunda, another group in Brashörnan outside Aula Nordica and some others virtually via Zoom.

“There will be a time for larger celebrations and we certainly strive to be able to have a proper party for the entire university,” said Vice-Chancellor Hans Adolfsson.

Those in attendance during the event on Friday 9 October were, among others, the University Management, the new County Governor Helene Hellmark Knutsson, County Councillor Lars Lustig and a large number of people affiliated to the Laboratory for Molecular Infection Medicine Sweden (MIMS) and Umeå Centre for Microbial Research (UCMR). The online link included collaborative partners, former vice-chancellors and indubitably, the centre of attention herself - Emmanuelle Charpentier.

“I wish I could have been there with you,” she said when she observed everyone gathered from her computer in Berlin.

“We would have loved to have you here. There will come a time when we look forward to being able to invite you here,” responded Hans Adolfsson. 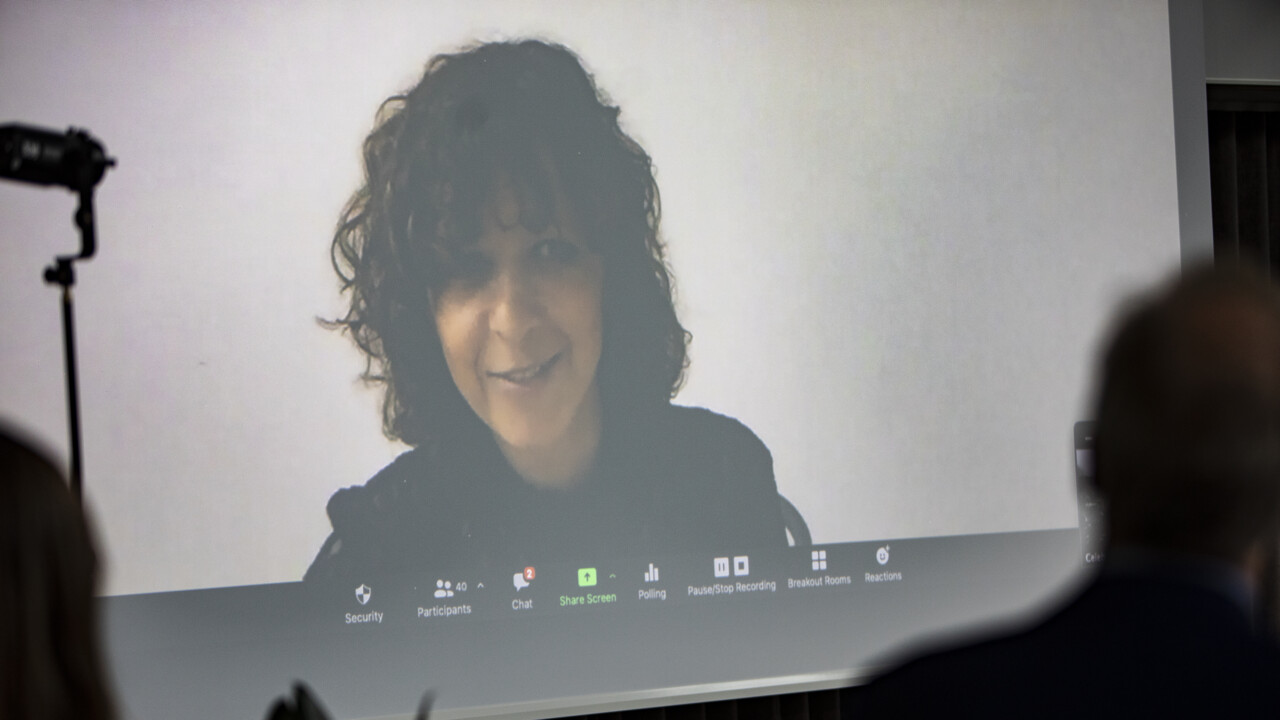 Emmanuelle Charpentier participated via an online link from Berlin since covid-19 prevented her from traveling and being physically present.

The Vice-Chancellor held an introductory speech and then urged everyone to raise their glasses filled with sparkling cider, to honour the special occasion.

Unfortunately, the Nobel laureate herself was not provided with a glass of bubbly to toast with. Something she quickly solved by grabbing a sturdy glass of water at the computer that she raised in the air. Everyone laughed.

The laughter was a constant during the gathering, which was cordial, both in words and atmosphere.

It’s a call. I have to come here and walk on CRISPR.

Emmanuelle personally described her first time in Umeå, about how she came to the north and stepped straight onto the snow that crackled under her feet and sounded like "crisp, crisp".

“When I heard that, I said it's a call. I have to come here and walk on CRISPR,” she said with a smile.

Oliver Billker, director of MIMS, assumed the role as master of ceremonies. He walked around the room and shared some thoughts, to those in attendance and via the online link.

There were many that took the opportunity to say a few well-chosen words to Emmanuelle. It was mentioned several times for continued cooperation and for her to visit. Oliver Billker emphasised that she is always "welcome to come home" and that if she wants to move her lab back to Umeå, it is perfectly okay. A wave of laughter filled the room again.

Video of the celebration

Hear all the speeches and get a glimpse of the party.

One of those who was eager to say a few words was Lena Gustafsson, former Vice-Chancellor of Umeå University.

“We are many who have been waiting for several years for you and Jennifer [A Doudna] to receive this prize. But at the same time, it should be noted that not many have received the Nobel Prize so soon after the discovery. We should not forget that you serve as role models for many young researchers and also for women. It's such a well-deserved prize.”

Think, it's only been 12.5 years and so much has happened.

During the midpoint of the gathering with all the people, Emmanuelle had déjà vu moment that threw her back 12.5 years when she first came to Umeå University to present her project and be interviewed for the position that she would eventually accept.

“It is an incredible pleasure to see you all again and I am so happy that you wanted to be here today. But think, it's only been 12.5 years and so many things have happened. Between the development of the project and all the applications we have seen of CRISPR/Cas9 technology in the last eight years, it has gone very fast. And now, I sit in front of you all 12.5 years later and we celebrate the Nobel Prize,” she said.

Patrik Danielson, Dean at the Faculty of Medicine, emphasised in his speech how fantastic it is that Emmanuelle Charpentier, despite her successful discoveries, has kept her humility and kindness, which makes her popular and likeable.

You are such a delightful person.

There was a common theme that several of the speakers wanted to convey, including Carl-Henrik "Calle" Heldin, who is chairman of the Nobel Foundation.

“It makes me very happy is when the Nobel Prize is awarded to nice people and you are such a delightful person,” he said.

The joy that Calle expressed about Emmanuelle Charpentier receiving the award was based on several factors.

“First and foremost because your discoveries are really great and will have immense importance for the future. Secondly, because you did your job at MIMS, in Umeå, here in Sweden. You have made us all very proud. And also, because you have contributed to a small balance in gender equality among Nobel laureates in chemistry. Of course, it is of enormous importance and you are a fantastic role model for young scientists in general and young female scientists in particular,” he said. 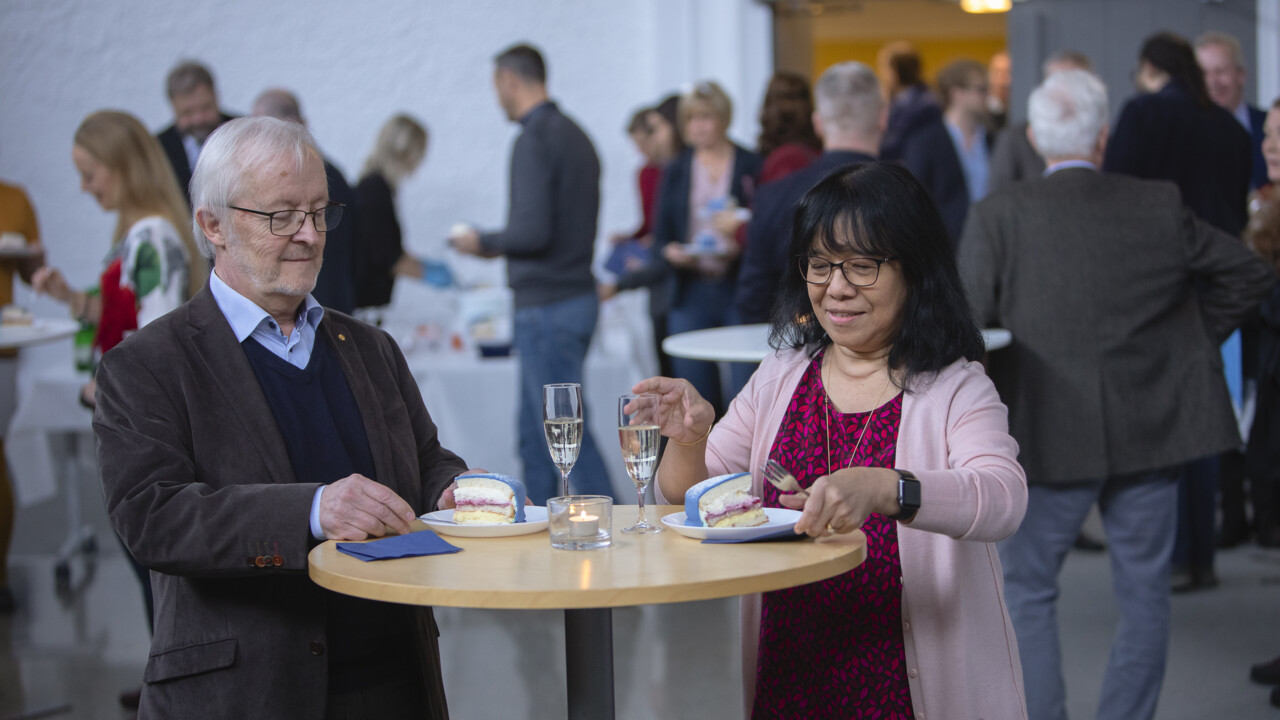 Bernt Eric Uhlin is a senior professor of medical microbiology. He was the director and head of MIMS and UCMR for the first decades. He was also responsible for the recruitment of Emmanuelle Charpentier. Sun Nyunt Wai is a professor at the Department of Molecular Biology.

Emmanuelle Charpentier also wanted to shed light on the fact that the fact that two women receiving the award now is a validation that something is changing in society at large, as well as the world of research.

Emmanuelle Charpentier also wanted to underscore what we call the Umeå University spirit, that is, a creative and open atmosphere at the University. An atmosphere where social spaces are created for people to meet and exchange thoughts and ideas. An atmosphere where students sense that they are acknowledged and can talk to everyone in the corridors, including professors.

Hans Adolfsson took the opportunity to ask Emmanuelle if she was missing the atmosphere at Umeå University.

“I see where you are going,” replied Emmanuelle and laughed. “I do not want to say anything bad about the atmosphere here in Berlin. But yes, I really miss the atmosphere at Umeå University."

Yes, I really miss the atmosphere at Umeå University.

The celebration lasted for just over an hour and, for the third time, all glasses were raised followed by the traditional Swedish “hip hip hurrah!” chant before the party came to an end.

Emmanuelle Charpentier has been awarded the 2020 Nobel Prize in Chemistry.