Javier's full surname is Jo Mai and he was born and raised in Guatemala to parents of Chinese origin. His interest in cultural differences began in the community where he grew up, and he has truly lived an international life his first 27 years.

Javier Jo really wanted to study at Umeå University and he fell in love with the city. He has been appointed as the university's Global Swede representative.

Javier’s international student journey began in the hotel industry, first in China, followed by an internship in Chicago, USA, and then he completed his studies in Switzerland. Thereafter, he worked again in the hotel industry in the United States and most recently in Abu Dhabi, Dubai, where he had the role of business developer in hotel management. After a return home to Guatemala, his mind was set on northern Sweden and the master's in finance programme at Umeå School of Business, Economics and Statistics.

“I felt that I wanted to take the step in my life and needed something more challenging. That's why I chose Umeå University. It’s because I knew that they offered a programme in finance that provided hand-on experience and a more personalised learning. Sweden is also known as one of the world's leading countries in terms of entrepreneurship and innovation,” says Javier Jo, pointing out that the advantage of a smaller university is that you have the opportunity to have exposure with a variety professors and teachers.

Umeå University also has close connections with various companies that can provide valuable advice and guidance, which has provided him with tools and a foundation for starting his own startup business. 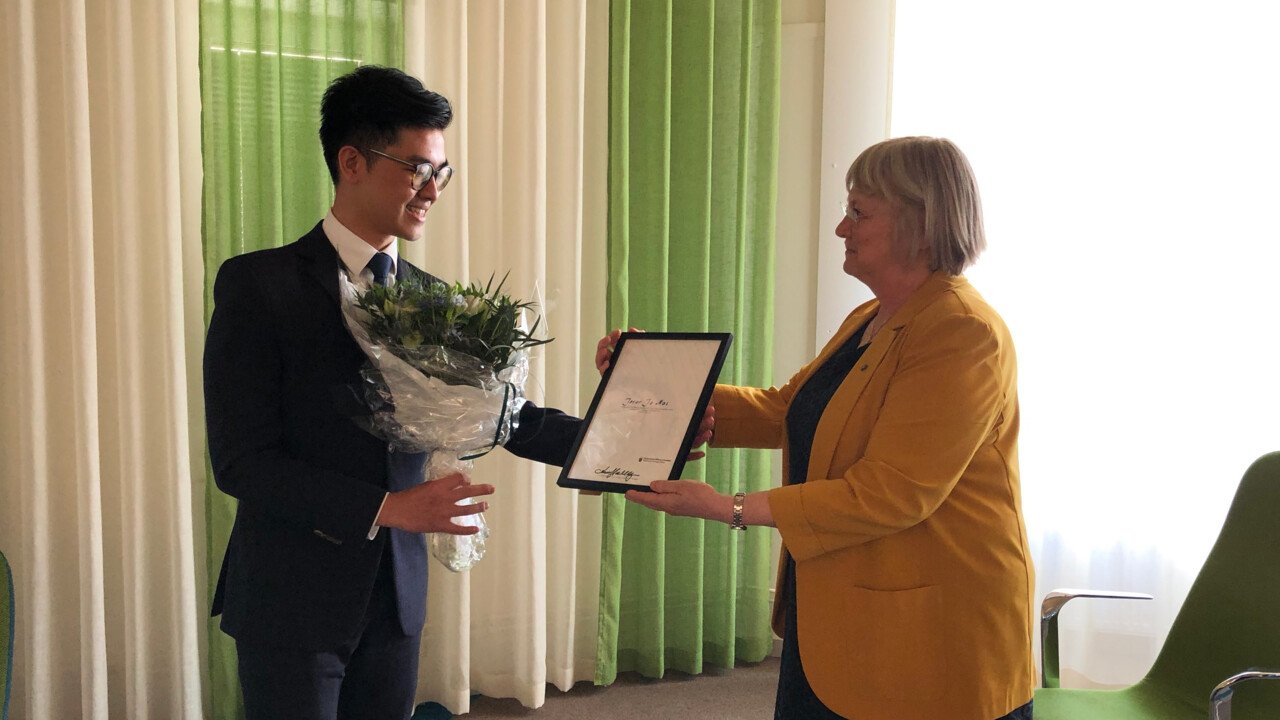 Javier Jo receives a diploma, flowers and pin from Deputy Vice-Chancellor Heidi Hansson during the Global Swede virtual ceremony that took place on 28 May 2020.

The Global Swede Award is an annual award from the Swedish Institute (SI) to recognise specially selected international students as important ambassadors for Sweden. Each university in Sweden nominates one candidate for the award.

This award means a lot to me.

One of the reasons why Javier Jo was selected by Umeå University is his keen interest in cultural differences which has led him to be very involved in building bridges between Swedish and international students. He is a member of the board at the Umeå School of Business, Economics and Statistics student association (HHUS) and has championed issues that have made it easier for other international students to be able to get involved and participate in activities.

“This award means a lot to me. I get to be an ambassador for Umeå University and Sweden, as well as the connection to Guatemala. In this world we need to be more connected to each other, as we are all dependent on each other,” he says, and describes that he’s had the chance to learn about different cultures and ways of thinking during his studies.

“Culture differences really drive change, because you are exposed to people who think very differently. But overall as whole group, you can come up with one great idea.”

"Javier Jo is a highly appreciated and driven student of the finance programme.  A true entrepreneur who has worked out an innovative project in sustainable fashion. He has organised company visits in both Sweden and abroad for business students. Javier has been a board member of the student association, and has encouraged and enabled more international students to get involved in activities. He has a strong interest in discussing cultural differences and has strengthened the community among international students."

Another aspect highlighted in the nomination is Javier Jo’s interest and work with sustainability. It was not until he came to Umeå that he understood how sustainability can make a difference. In true entrepreneurial spirit he developed an innovative project on sustainable fashion during his studies, and his is currently writing his thesis on sustainable finance and hopes to get a job in the sustainability sector in the future.

I really want to work here in Sweden.

Two years have passed and he is nearly complete with his master's studies at Umeå University. But Javier Jo is certainly not done with Sweden. He now plans to continue learning the Swedish language and, despite the difficulties caused by the covid-19 pandemic, enter the job market.

About the Global Swede Award

The Global Swede Award is given annually by the Swedish Institute to recognise international students who are considered to be good ambassadors for their higher education institution and for Sweden. Each university nominates a candidate.

Javier Jo is one of 19 students nominated from universities throughout Sweden. This is the tenth consecutive year that the Ministry of Foreign Affairs and the Swedish Institute have organised the Global Swede diploma ceremony, and for the first time it will be a virtual ceremony.

Javier Jo received his award from Heidi Hansson at Umeå University while the other nominees, Sweden's Minister for Foreign Trade and Nordic Affairs, the Director-General of the Swedish Institute, moderator and ambassadors from countries, took part in the virtual ceremony.

Education, research and collaboration in business administration, economics and statistics.

Javier Jo Mai, was honoured at a digital ceremony and received a diploma for the award.