NEWS A festival in the Norwegian island municipality of Træna kicks off a project on rural and community development for the second-year students at the five-year Architectural Programme in Umeå. 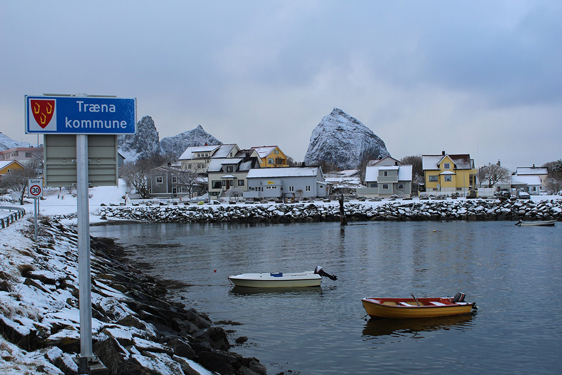 “We went to Norway to take part in the Træna festival. It contained workshops and lectures raising issues on the survival and development of small communities in the north,” says Tobias Westerlund, lecturer at Umeå School of Architecture at Umeå University.

Træna municipality consists of 450 islands, islets and rocks in the Norwegian Sea about forty kilometres from mainland Norway. The landscape is dramatic with high mountains rising above the sea. The region has been inhabited since the Stone Age and the people here have always had fishing as their main livelihood.

The municipality has only 478 inhabitants. Nevertheless, it has still become known for its music festival that attracts up to 2,000 visitors every summer. At present, the municipality works on a plan to develop the society by 2030, together with an aim for a total population of 555 inhabitants, to secure service and employment.

“The fact that we are a small community means that politicians and politics come closer to the inhabitants. Those who live in Træna also feel they can participate and influence the development,” says Moa Björnsson, head of development in Træna municipality, who gave a talk to the students.

In Norway, there is a larger number of small municipalities than in Sweden. In Sweden, major municipal reforms were conducted during the 1900s that resulted in merging many small rural municipalities with larger towns. The Norwegian rural politics is also often presented as much more generous than the Swedish one.

“Many architects focus on cities. However, it is important that our future architects not only focus on cities, but that they also incorporate rural areas. This study trip gives a good opportunity for students to learn more about how architecture and community planning interact, and to learn to see both the individual and societal perspective,” says Tobias Westerlund.

In addition to participating in the various activities within the framework of the festival, the students were also asked to identify the characteristics of the island of Husøy: What distinguishes the location? What are the buildings and topography like? What activities take place there?

“Our strongest impression was the affinity of the people living there. The Træna inhabitants that we interviewed also confirmed that the best thing about life in the area was the great social cohesion, together with the nature,” says Thea Salomonsson and Ella Nyström, both students working together on the project.

Having returned from the trip, the students are now in the process of compiling their surveys. The next step is for the students to propose and design an architectural project on the islands of Træna. The results will be presented to the public at the End of Year Exhibition at the Umeå School of Architecture in early June.

“When we returned from the trip, we started looking at how to work with the identity of the location. Both of us have an interest in the tourism industry and we see a potential in developing it in a sustainable way. We want to investigate how potential visitors and local inhabitants’ interests could benefit each other,” says Thea Salomonsson.

The students travelled to Norway between 15 and 19 February.

About Umeå School of Architecture:

Umeå School of Architecture is a part of Umeå University and is beautifully situated alongside the Ume River, a stone’s throw from the city centre. The Architectural Programme started in 2009 and presently has about 250 students at Bachelor’s and Master’s level.

The School is a part of the Umeå Arts Campus, which also houses the Umeå Academy of Fine Arts, Umeå Institute of Design, HUMlab-X, Bildmuseet contemporary arts museum, Sliperiet cross-disciplinary collaborative and experimental platform, and a library focused on art, design and architecture.