Climate changes might decrease eutrophication in the Baltic Sea

NEWS An established view is that increased inputs of nutrients to the sea, e g via river flooding, will cause eutrophication and phytoplankton blooms in the coastal areas. New findings by EcoChange researchers indicate that things actually might be the opposite. 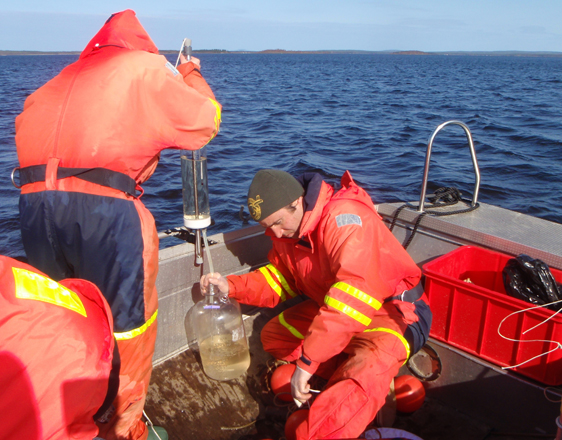 Climate change has been predicted to cause increased inflow of freshwater to coastal areas in northern Europe, e g northern Baltic Sea. River waters in these areas are often brown and contain high concentrations of organic carbon (ADOC), in addition to nitrogen and phosphorus.

During the productive season of this summer studies were performed in Emån estuary in the south of the Baltic Sea and in Råneå estuary in the north. Samples were taken in the rivers and the coastal waters. Phytoplankton and bacteria production, as well as microbial diversity, were analysed. The project is part of the EcoChange theme 1, and the field work has been led by Ecology Professor Catherine Legrand at Linnaeus University in Kalmar and Ecology Professor Agneta Andersson at Umeå University.

These changes in the lower levels of the food web might cause serious problems in higher food web levels. In the end fish production may be affected.
– If the phytoplankton primary production decreases in the coastal areas it is likely that also the fish production will decrease, says Agneta Andersson.

The samples are now being further analysed. Final results are expected in winter 2011/2012.