NEWS "It has been really inspiring to follow the development and success of all our doctoral students and give them advice and support," says Benkt Wiklund, coordinator of the Industrial Doctoral School (IDS), who is due to retire in June. 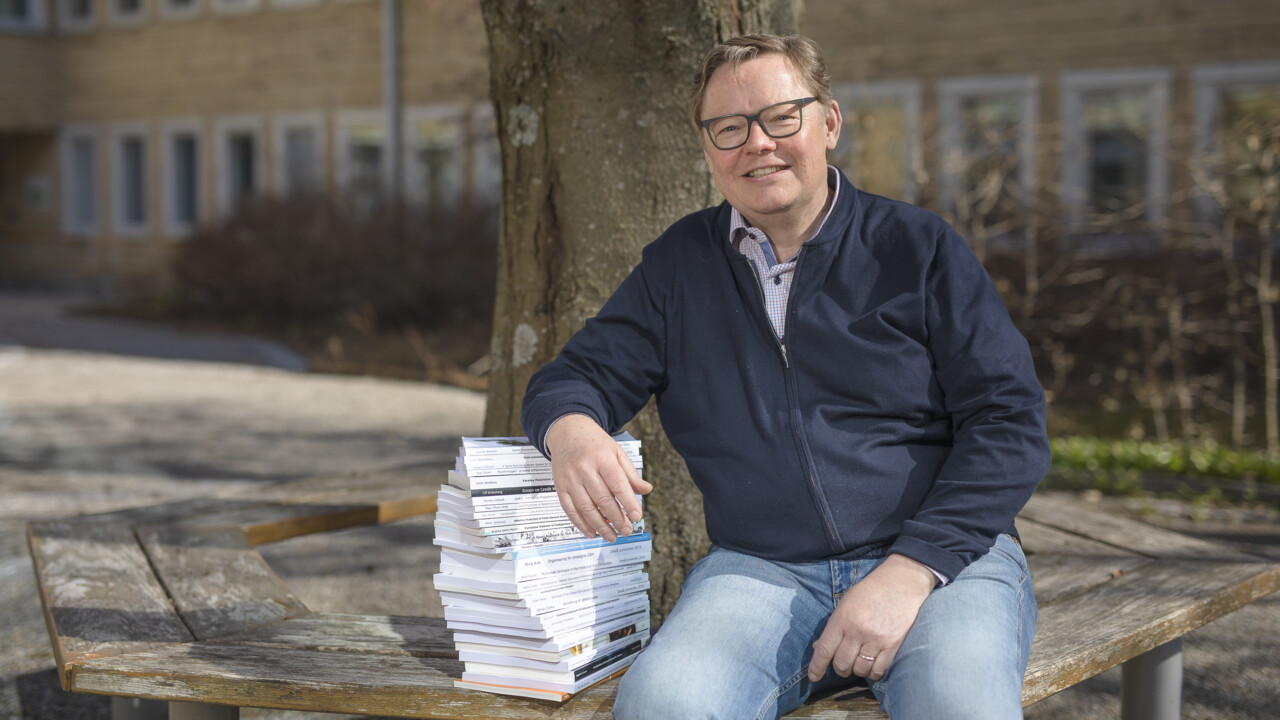 Benkt Wiklund with the 29 dissertations submitted to Umeå University's Industrial Doctoral School since it started in 2008.

Benkt Wiklund has been around ever since 2006 when preparations began for the faculty-wide Industrial Doctoral School for Research and Innovation at Umeå University, ready for the first intake twelve years ago. With his expertise in collaboration issues and networking, he was instrumental in creating the successful doctoral school of which the university's leadership is so proud, and which enjoys high levels of satisfaction from doctoral students, supervisors and external parties alike. 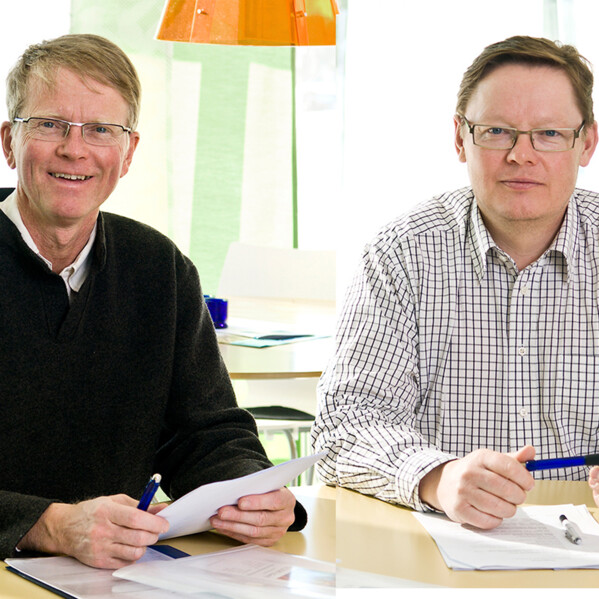 Benkt remembers the first workshop gathering the 13 doctoral students who had been admitted, their supervisors and the external parties, for a three-day seminar in the beautiful surroundings of Holmsund in late summer.

"I was extremely worried that the practical arrangements would go wrong or that the timetable would not work out. What's more, I didn't really understand anything about what the projects actually entailed. It was a mental roller coaster but I also had the feeling that we had started something very good."

Initially, there was some scepticism from part of the research community about external funding for research, but the concept has come to be understood better over the years, along with the idea of conducting research in collaboration with an external party. Doctoral projects are usually funded 50 per cent by the university and 50 per cent by the external party. The doctoral school recently introduced 75 per cent funding for non-profit organisations because this sector may otherwise have problems funding a doctoral student for four years.

"Getting supervisors and projects on board in the humanities also proved to be difficult. Eight years ago, we made an attempt to increase interest and awarded 100 percent funding to projects from the Faculty of Arts and Humanities. This resulted in two projects – one with SSR (Swedish Sami National Association), and one with Musikverket (Swedish Performing Arts Agency) . With my own background in the humanities, I would have liked us to have more than the four projects so far in this area."

A teacher with an interest in collaboration

Benkt Wiklund grew up in Stockholm, attended high school at Norra Latin and spent one year as a junior at High School in Bangkok. After his military service he started working as a salesman and moved with his future wife to Skellefteå. From 1979 to 1983 he completed teacher training at Umeå University, specialising in history, religious education and geography.

During the 1980s, Benkt worked as a teacher and headteacher before being given the opportunity to work on education issues for the business community in Skellefteå. He created a network for business leaders and ran a trade fair for the Swedish optoelectronics industry for a few years.

"In that role I learned about the skills needed by the business community, and I also had dealings with Umeå University because I was one of Skellefteå municipality's points of contact for higher education issues. At the end of the 1990s, I was headhunted by Umeå University's collaboration unit, UnivEx, to help the university identify the skills and education requirements in the municipalities in Västerbotten."

It was Göran Sandberg who floated the idea of an Industrial Doctoral School at Umeå University when he began his tenure as rector in 2005. The aim was for the university to train postdocs for Swedish industry. The task was given to Professor Petter Gustafsson who also became the first director.

"Petter and I met at a meeting where I presented my work for Humanistic Offensive, which was about encouraging collaboration between humanities students and various companies. He hired me on the spot to work with him on the Industrial Doctoral School, and together we built the foundations for the doctoral school that we see today." 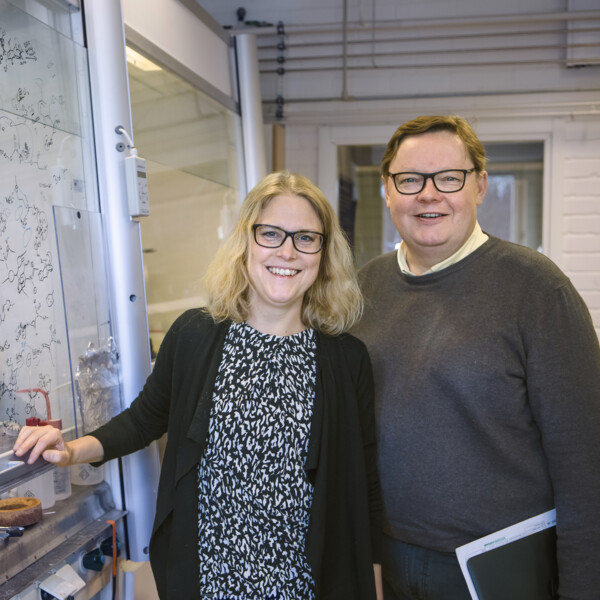 Benkt says that Petter Gustavsson led the work with great sensitivity. He recognised a person's knowledge and skills, and listened to new ideas that he was happy to engage with. He was succeeded by Professor Anna Linusson and according to Benkt, her leadership was resolutely focused on organising the Industrial Doctoral School and giving it a more clearly defined structure.

"For me, this meant that I had to leave my role as a starter and become more of a developing manager."

Benkt Wiklund's day-to-day responsibility as coordinator means looking after operations and reporting to the director and steering group of the Industrial Doctoral School. Ongoing tasks range from scheduling, booking of premises, study visits to external parties and contact with teachers in the different courses, to course evaluations. Benkt has also arranged large workshops, both in Umeå and also as part of the European network of industrial doctoral schools.

"My top priority was to make the course package engaging and important for the doctoral students.  I also encouraged our doctoral students to generate the kind of team spirit that allows them to use their different subject areas in dialogue with each other."

In the international context, Benkt Wiklund would also like to highlight the Industrial Doctoral School's work with the European University Association, EUA.

"We became a 'best practice' organisation in their project DOC-CAREERS II. By participating in the EUA's various events, the Industrial Doctoral School has received recognition far beyond Sweden, and as a result I was invited to be a guest speaker at RMIT University in Melbourne and the University of Las Palmas. I was also able to share our experiences with the ministries of education in Spain, Italy and Romania. All this was beyond my wildest dreams when I trained to be a teacher in the 80's."

Challenges for the future

According to Benkt Wiklund, communication – both inward into the organisation and outward into society – is one of the biggest challenges for the Industrial Doctoral School in the future. This is a question that the new director, Patrik Rydén, will have to tackle.

"It is important to communicate in effective and possibly new ways to let researchers in all faculties know about our doctoral offering, and to encourage more companies and organisations to appreciate the benefits of having a doctoral student who can generate new knowledge for development."

Will you miss the IDS now that you are retiring?

"I will of course miss working at the Industrial Doctoral School, even though I have had a few years to wind down. I'll miss the doctoral students most of all, and the fantastic discussions that always happen whenever we meet. I am in touch with some of the postdocs through social media, to varying degrees. Since the early days, half of the postdocs have been working in non-academic settings. I will also miss the international activities in the European network and in the EUA workshops. I'll be saying goodbye to a lot of friends." 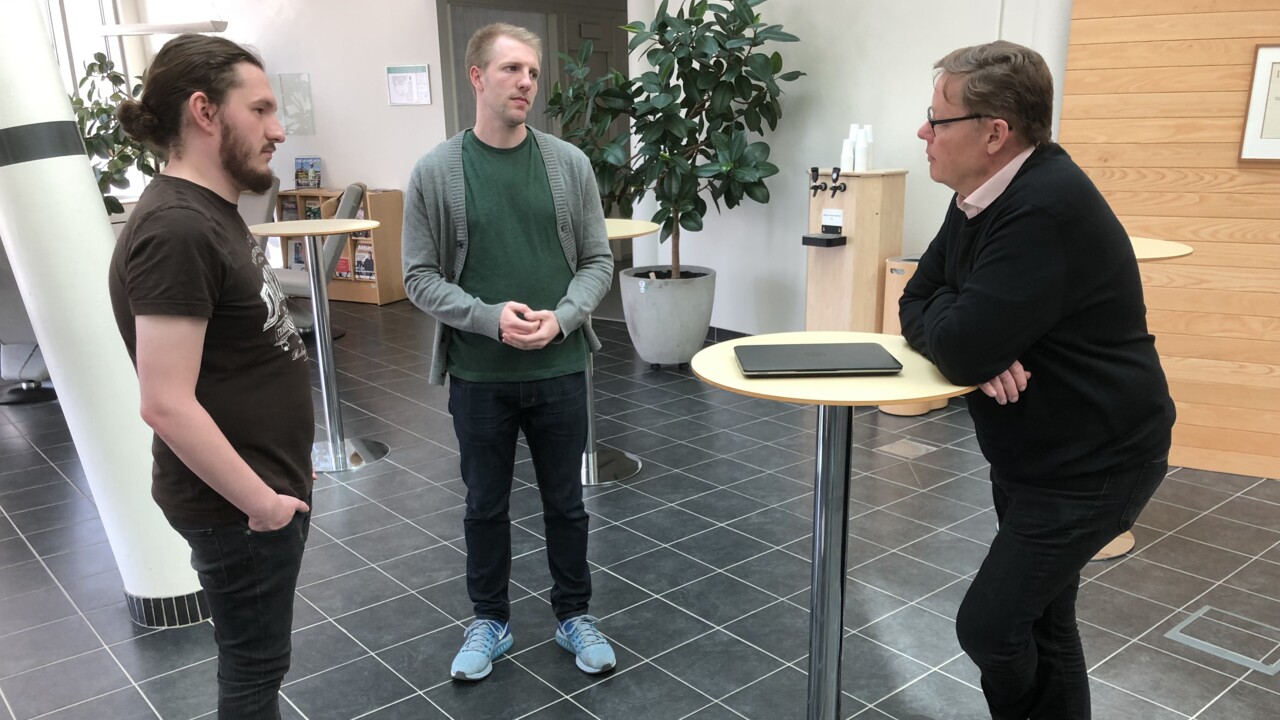 Benkt Wiklund in discussion with the doctoral students Lucas Haskel and Norman Hoster.

Name: Bengt Viklund (I changed the spelling to Benkt Wiklund on a whim at high school)
Family: I am married and have two children and grandchildren
Lives in: Mariestrand
Retirement plans: Play more guitar, chop wood and take care of the wood shed in my summer house, and hopefully keep travelling
On the bedside table: "Försök till triangel", a collection of novellas by Karl Kavaleff, my history teacher from high school
Watching: Right now I'm reliving Matador (a high-quality Danish series from the 80's), sports and factual programmes/documentaries
Hobbies: Music – playing one of my eight guitars, food and wine, and doing jobs around my second home
Myself in three words: Inquisitive. Sociable. Solution-oriented
The best thing about the Industrial Doctoral School: Unsurpassed. Encourages collaboration. Interdisciplinary