New knowledge about food can improve the overall health of children

NEWS Dietary factors during infancy are a significant factor for health later in life.  We know that breast milk is good for infants, however for the transition period from baby food to the family’s ordinary food – type and timing – there are no evidence-based studies. Nutritionist and gastronome Ulrica Johansson immerses herself in the study of optimised supplementary food intake for young children in her doctoral project within the OTIS study. 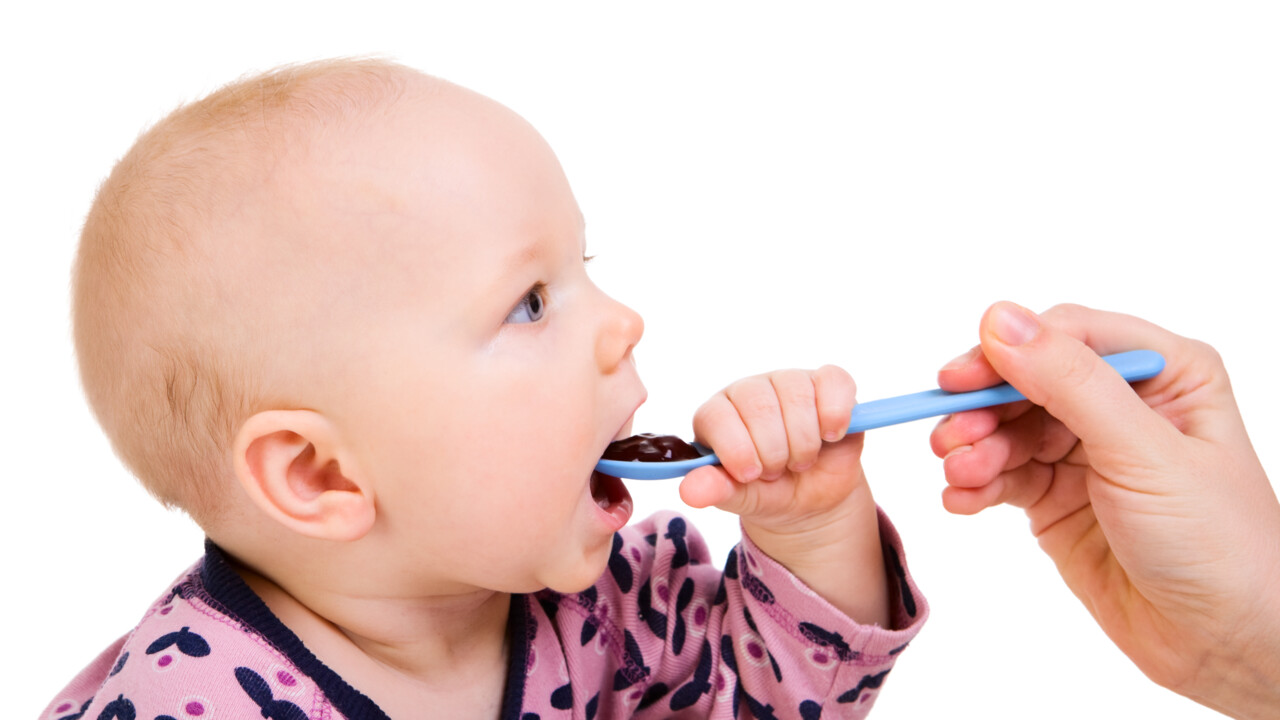 At four to six months old, it is common to introduce taste portions to infants.

“It’s so extremely important! This is the first study that provides an overall assessment of the introduction of the Nordic diet to infants, but also of evaluating the Swedish recommendations that apply to infants today,” observes Ulrica Johansson, doctoral student at the unit for Paediatrics at the Department of Clinical Sciences and the Industrial Doctoral School for Research and Innovation.

“Today’s dietary advice pertaining to young children is based partly on tradition and experience. At four to six months old, it is common to introduce taste portions to infants. The taste, texture and how it is served are relevant in terms of how and what the child eats, as is the parents’ approach and strategies. Between the first and second year of life, children normally begin to show increasing suspicion of certain tastes, for instance bitter and sour flavours from vegetables and fruits. However, these are an important part of what is healthy to eat and there can be some value in introducing this at an early stage.”

A diet for good health

By systematically introducing a variety of different flavours from fruits and vegetables into the diet of young children, the intake of these foods can be increased over the long run.

“The overall goal of my study is to study the effects of the New Nordic Diet concept with infants. The New Nordic Diet is a concept from the Nordic Council of Ministers to promote regionally produced Nordic seasonal food and help reduce climate impact. In other studies, the New Nordic Diet has shown improved health in schoolchildren in Denmark and with adults in Sweden. However, nobody has previously conducted a study on infants,” comments Ulrica Johansson. 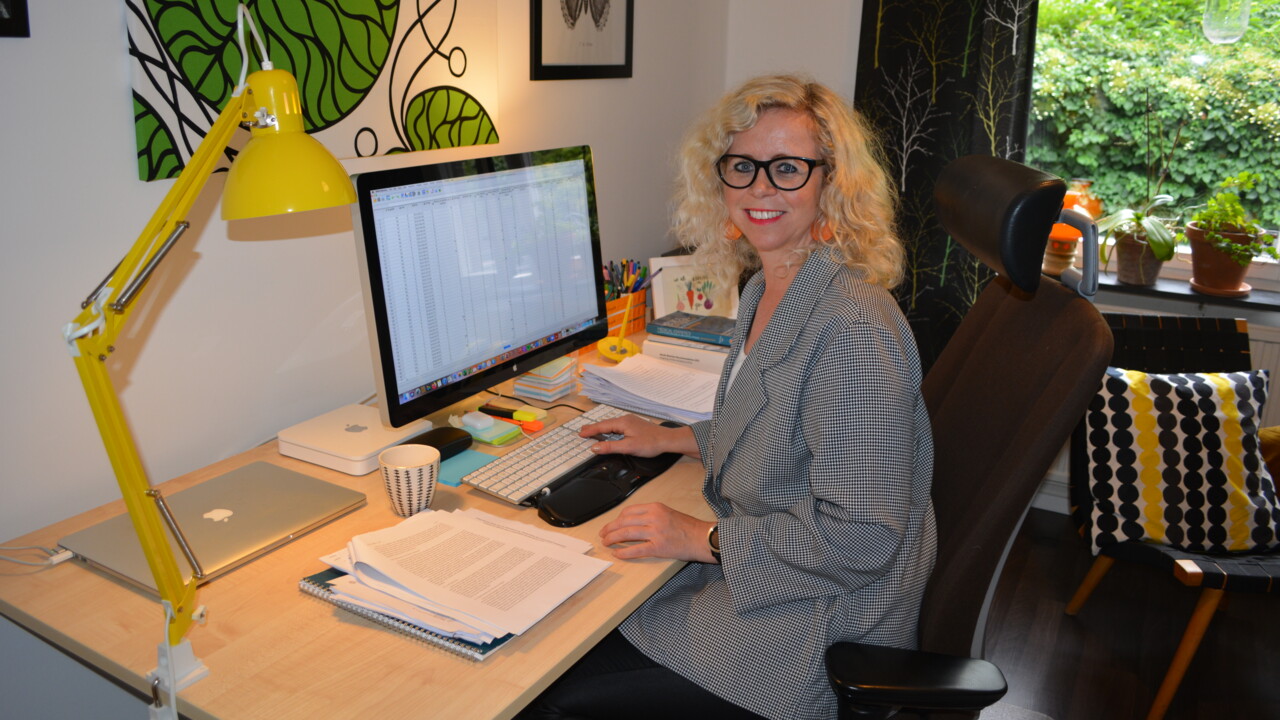 Ulrica Johansson at her home office.

Previous studies have also shown that high protein intake in infants can have adverse effects on health later on. Therefore, Ulrica has allowed the New Nordic Diet to be reduced in protein in infants, in order to achieve more health effects at an early age. Later she compared the New Nordic protein-reduced diet with the Swedish recommendations for infants.

“We study the effects on children’s growth, body composition, metabolic biomarkers, intestinal flora, dietary intake, food acceptance, food preferences and eating behaviour from 4 to 18 months old. We give the test group a New Nordic Diet and the control group eats according to the national recommendations of the Swedish National Food Agency and the Child Health Care Centre (BVC),” Ulrica Johansson informs us.

Seasonal food produced in the Nordic countries is encompassed in the New Nordic Diet. It contains quite a lot of fibre, root vegetables, berries, fruits, vegetables, beans, rapeseed (canola) oil, fish, whole grains and not so much red meat, sugar, salt and saturated fat. The Diet is similar to Mediterranean food, but in the New Nordic Diet rapeseed oil is used instead of olive oil, and it usually contains more fibre from root vegetables, whole grains and more berries. Relatively recently, the World Health Organisation has rated the New Nordic Diet as being as effective as the Mediterranean diet in its health effects in reducing diseases of affluence.

Experiments with families with children

Ulrica Johansson is conducting several experiments, both in the home environment of families with children and at the research clinic at University Hospital of Umeå. The Nordic Diet test group was given a taste schedule to systematically introduce taste portions at home when the child was 4-6 months old for a period of 24 days with recipes for homemade purees from Nordic berries, fruits and vegetables. Ulrica videotaped the children in their home environment while they eat a meal when the child was between 12 and 18 months old, to watch flavour perception and taste acceptance, and parental sensitivity in connection with a meal situation. 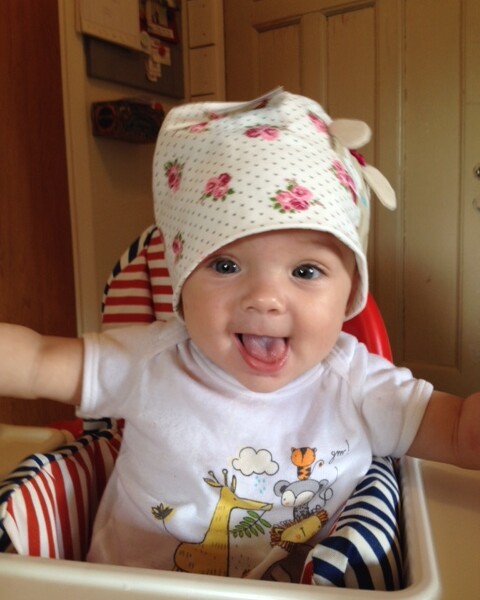 The babies are nice and cozy to meet with the parents at the research clinic.

At the clinic, Ulrica has conducted several different experiments and research nurses have taken blood specimens and measured the children’s growth at different times to obtain an overall assessment of the children’s health. The nurses also collect urine specimens from the children so that Ulrica can study the children’s body composition based on food intake. Children and parents have also been videotaped for the purpose of studying the child’s level of development in a play situation.

“Our fantastic families have made a brilliant effort and managed to implement a study protocol that is both challenging and time-consuming. In addition, our dietary intervention has been going on for a long time, about 12-14 old months. When working with infants with whom we cannot communicate with, this places great demands on parents to actually conduct the tests.”

Ulrica Johanssons conducts her doctoral studies in joint collaboration with the external party Semper AB. Semper is the leading company in the Nordic region in the categories of baby food and gluten-free products.  Their head office is located in Sundbyberg and since 2006 Semper has been owned by the Swiss international food conglomerate Hero Group.

At their production plant in Götene, baby porridge, gruel, infant formula as a substitute for mother’s milk, and gluten-free blender are produced. Ulrica, together with her academic supervisor and fellow students in the Industrial Doctoral School for Research and Innovation, has made study visits to the factory and taken note of how gruel and porridge are produced. They also gained insight into the stringent regulations that prevail with the production of baby food. The raw materials are carefully selected so as to be in compliance with the requirements. Ulrica has also been to the head office in Sundbyberg several times, to give lectures, have meetings and discussions with those who are developing the children’s food used in the study plus to also meet with the senior management of Hero Group to update them about the study.

“The joint collaboration with Semper works great. We have an excellent dialogue between us plus an open climate. I am also doing my internship period here, with completely different work tasks than usual. The things I have worked with include marketing and how we might be able to communicate healthy eating habits to parents.”

Both gastronome and dietitian

Ulrica Johansson has a background as a chef and worked primarily in the restaurant industry in Stockholm before she started studying culinary arts at the Gastronomy Programme at Umeå University.

“I think I am still the only one in Sweden to have a joint degree as a gastronome and dietician. This was one of the reasons I was able to obtain the doctoral studentship, as I combine gastronomy with nutrition in the field of medicine. In addition, before I was employed in the Optimized Nordic Supplementary Feeding Study (OTIS), via my company Dietistgastronomen Ulrica AB I developed all the baby food recipes used in the study.”

Ulrica has a very broad CV; in addition to her scientific research work, she is also a cookbook author and initiator of the cookbook “Lustful Snacks for Children with Cancer” which resulted in her receiving a silver medal in the international cookbook competition Gourmand World Cookbook Awards in Paris in 2012. 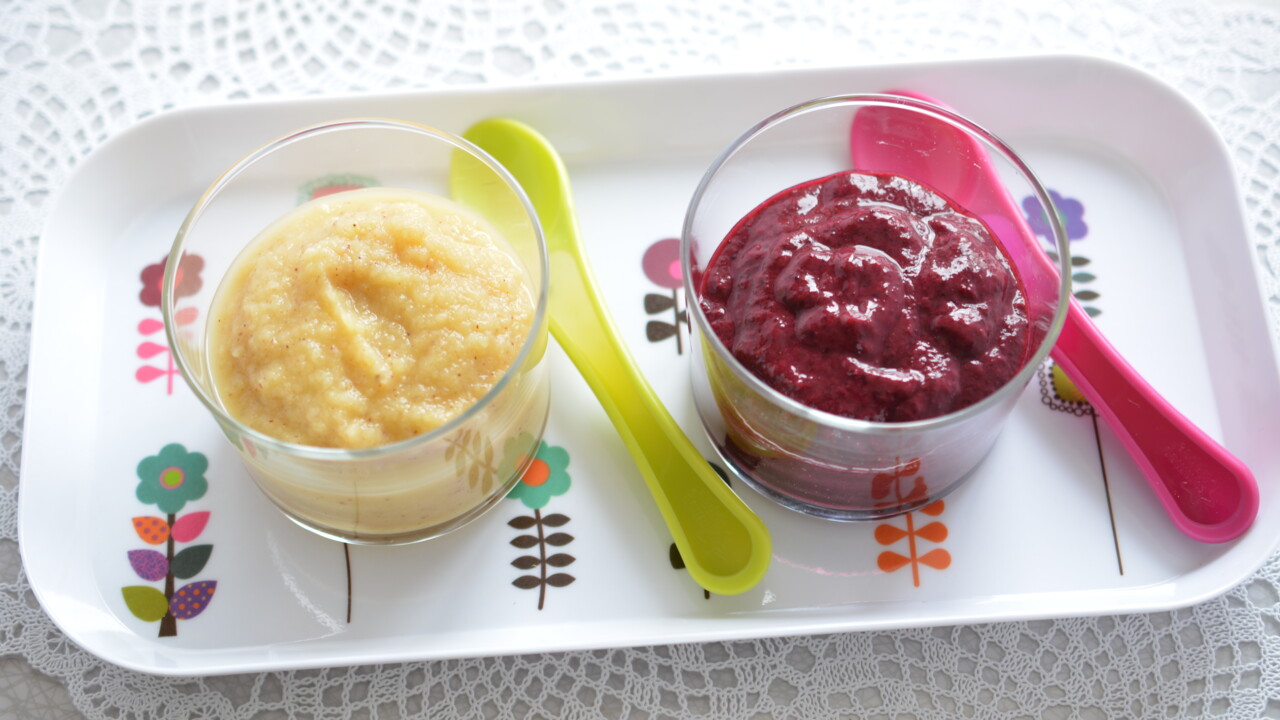 An example of baby food in the study. The Nordic test group received the recipes from Ulrica Johansson's own company.

What is it like to get a PhD at the Industrial Doctoral School for Research and Innovation?

“The highlights have been all the company visits to each external partner, which has provided the whole group an with understanding of how research can be usefully integrated within the companies. The visits to the company have also involved some travel, and this means that the doctoral group has a nice cohesion. We have been challenged in so many different ways and I have been able to take a unique package of useful courses, which, although this has taken up a lot of time from my research work. One of the highlights was a European PhD student conference in Ghent, Belgium, which I had the good fortune to attend.”

“We have a good atmosphere and dynamics the group – a broad interdisciplinary participation from many subject areas and an age range of 20 years. Many of us have professional experience behind us, while others are closer to the academic world. It can be nice to meet a doctoral student working in a completely different field from time to time and talk about research. But usually, we talk about other things!”

Tell us, what is most interesting and enjoyable about being engaged in research?

“The best thing about getting a PhD is to be able to contribute new knowledge and be part of the huge network of knowledge that each researcher contributes to with their own piece of the puzzle. Curiosity motivates me the most, plus that research is a creative process. And then there is the network of contacts and skills that drives me to be persistent and proceed further. Without these talented people, I would not have made it through my journey as a doctoral research student.”

“One works under time pressure that can be tough as a doctoral student and obtaining the ‘driving licence’ which a researcher requires an enormous amount of work. It is an emotional journey that is sometimes breathtakingly fun when things are going well, but can also be very heavy when doubts arise if I can really handle this. It is precisely these thoughts that are good to air with other doctoral students or within the research group at the Industrial Doctoral School for Research and Innovation, because everyone has been there at some point during the trip to the public defence. And I have been lucky with my academic supervisors, colleagues and the closest contacts within Semper that give me enormous support.”

Name: Ulrica Johansson
Me, in three words: Creative, curious, positive
Family: Partner, two bonus kids and a Jack Russell terrier called Ivve
Lives in: Skövde
Favourite food: Modern Swedish home cooking, preferably vegetarian
Best snack: A sandwich and fruit paired with a cup of tea/coffee
Doesn’t eat: Organ meats are not a favourite of mine
When I’m being unhealthy useless, it’s going to be: Pain au chocolat for breakfast
Favourite restaurants in Stockholm: Rutabaga and Paul Taylor Lanthandel
Currently reading: The Hidden Life of Trees: what they feel, how they communicate, by Peter Wohlleben and Paul Svensson’s book Vegetables A-Z.
Favourite TV programmes: Mästarnas mästare and Vinterstudion [Master of Champions and Winter Studio]
Like to do on an autumnal Sunday: Cycle with my MTB or hike on Billingen, preferably with a thermos and good coffee with me in my hiking daypack
The Industrial Doctoral School in three words: Personal growth, interdisciplinary, familiarly 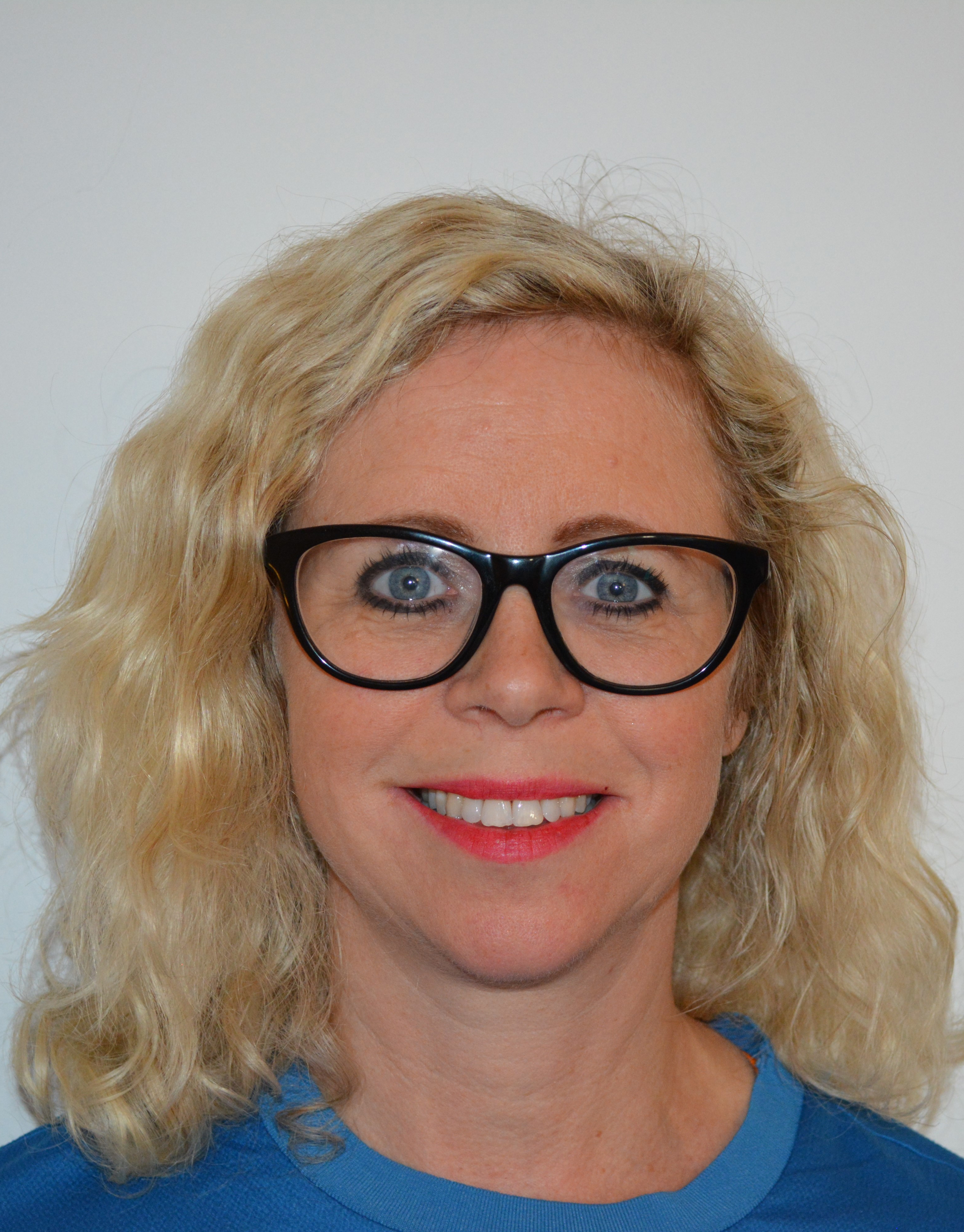