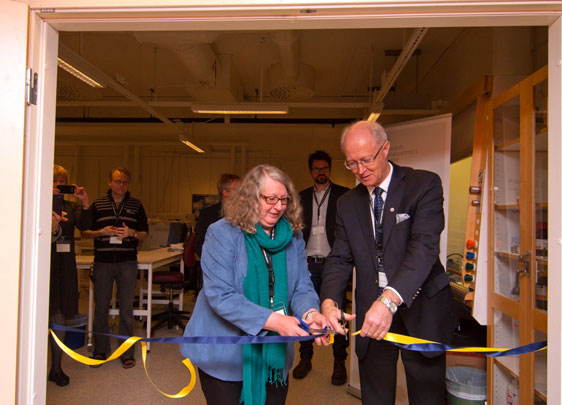 The opening was celebrated with a two-days symposium. Invited speakers from United Kingdom, Japan and collaboration partners from Chalmers University of Technology, SLU Uppsala and Umeå, and Umeå University gave a beautiful overview over the present possibilities of metabolomics research and service.

Facility manager Jonas Gullberg introduced the audience to the new service and research plans. The centre will analyze samples from research groups of all Swedish Universities.

Thomas Moritz, director of the Swedish Metabolomics Centre, showed examples for applications of metabolomics. He mentioned that metabolomics will in the future be able to detect physiological changes in humans, animals, and plants. Changes that might be caused by toxic insult of chemicals, infections, inflammations or reactions on environmental changes.
The close collaboration with Chalmers University of Technology and the NMR facility at Umeå University gives scientist the possibility to cover all analyses which are needed to characterize the metabolomics of plant and animal/human organisms.

The centre received a major funding last year from the Knut and Alice Wallenberg Foundation which enables the scientists in Umeå to invest in state of the art techniques and hire more personnel.