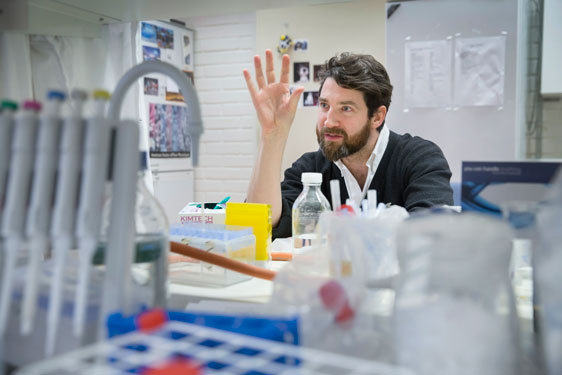 “I feel thrilled and honoured about the news. This type of grant, which is not earmarked for any particular project, gives me more freedom to follow my creative ideas and to take a few more risks while conducting the research I am passionate about,” said Olivier Keech, associate professor at Umeå Plant Science Centre at Umeå University.

Olivier Keech’s research focuses on plant metabolism and, in particular, on mitochondrion in plant leaves and their function in relation to photosynthesis and senescence, which is the process of leaves turning yellow. He combines physiological and biochemical studies with molecular methods and so-called -omics techniques (a generic term for a number of techniques that study biological dynamics on a comprehensive level).

One of his research topics, post harvest shelf life, covers the subject of reducing vegetable wastage in the food supply chain caused by long transports and storage in shops.

“It would be beneficial if supermarkets wouldn’t have to throw away such an amount of rotten vegetables as they do today. By inducing mutations and modulating the expression of key genes, the shelf life of vegetables can easily be prolonged threefold. We have completed successful experiments on the plant model Arabidopsis and the results can, in theory, be transferred to species such as cabbage, broccoli and canola.

Besides being a dedicated researcher with an extensive international network, Olivier Keech is also a very committed lecturer. He is involved in the newly started Master of Science Programme in Bioresource Engineering at Umeå University, which aims at educating engineers in striving for a sustainable society. He also holds a prominent role in the concluding stages of the university’s master programmes in engineering – the project course Design, Build, Test. Recently, his idea of a miniature ecosystem was implemented by a group of students who built a prototype based on several trophic levels including fish, plants, mushrooms, and phyto-/zoo-planktons. The prototype has gained huge interest both in the media and from schools.

Olivier Keech finds it interesting to take such an applied project further, as he sees an interesting societal contribution.

“If possible within the framework of this grant, I would like to push forward this idea and develop a multi-trophic ecosystem model that could be used as an educational tool in schools. It might even be possible to hire an engineer to work specifically on this project.”

Before arriving at Umeå University, Olivier Keech held a research associate position at the Australian Center of Excellence in Plant Energy Biology in Perth, Western Australia. Since, he has nicely settled down in the north of Sweden and likes it in Umeå. Of course, both culture and climate remain quite different from what the Loire Valley in France had to offer during his childhood.

Olivier Keech was born 1979 in Montargis in France and grew up in the Loire Valley. He studied at the University of Tours from 1997–2002 and earned his Degree of Bachelor in Pharmaceutical Science and Animal Physiology in 2001, and in 2002 his Degree of Master in Plant Physiology and Biochemistry. In 2002, he travelled as an exchange student to Umeå to perform a degree project in forest ecology at the Swedish University of Agricultural Sciences. He completed his PhD studies in 2008 with a Degree of Doctor in Forest Ecophysiology from the University of Nancy and a Degree of Doctor in Plant Biochemistry from Umeå University. From 2008–2011, Keech’s academic career continued as a research associate at the Plant Energy Biology Centre at the University of Western Australia in Perth, Australia. In 2011, he was recruited back to Umeå University for a postdoc until 2013. At present, he works as an assistant professor and has established his own research group.

This is the fourth consecutive year the Kempe Foundation to appoint researchers Gunnar Öquist Fellows. The award includes a SEK 3 million research grant, which may be used freely for three years, and SEK 50,000 as personal funding. Professor Gunnar Öquist, Umeå University's perhaps most internationally renowned scientist, has lent his name and will mentor the selected persons. Thanks to his long-standing work at the Royal Academy of Sciences and his many contacts with Nobel Laureates, he has valuable experience in cutting-edge research, which may benefit the awardee.