NEWS Two new exhibitions open at Bildmuseet on Sunday 12 June, one of them presents a selection of artist Saara Ekström’s latest works, based on her fascination with alchemical processes. Press preview on Thursday 9 June, at 10:00. Welcome! 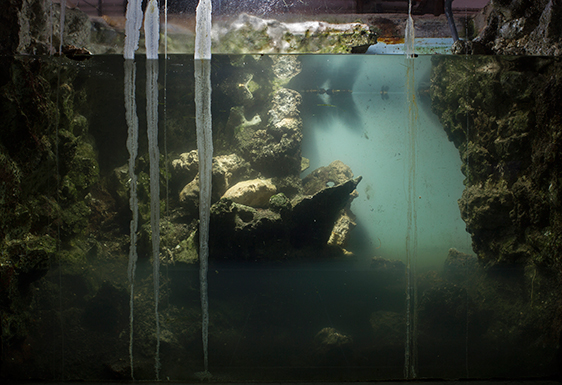 The exhibition Fouad Elkoury / The Greatest Day is presented to the media on the same occasion, and both artists will be present. Also participating is Laura Köönikkä, Curator at the Finnish Art Agency.

Alchemy. Life and death, blooming and withering, attraction and repulsion challenge each other in Saara Ekström’s provocative aesthetics. She brings together contrasting phenomena in unexpected, unsettling ways and questions culturally bound notions of what objects and materials symbolise. Saara Ekström works mainly with photography and video, but also with text, sound and sculptural installations. The exhibition title Alchemy refers to a process in which symbolic values are refined and modified.

In the three-channel video installation Phantasma (2016), the camera transports the viewer through the dreamy, delirious and dilapidated rooms of an aquarium that opened in Copenhagen in 1939. Another work in the exhibition is a new series of photographs that puts the focus on things that we encounter daily but rarely truly observe. Car tyres, plastic chairs and other items are re-contextualized to form peculiar compositions.

Inventory (2016) is in the form of a newspaper. Using text and archive images, depicting the fate of the reclusive brothers Langley and Homer Collyer under the pressure of hoarded possessions. Collecting, categorising and trash is also a theme in the video work Oracles (2016). It connects anthropologically significant objects with pseudo-anthropological material – trash collected from the streets. Alchemy (2016) is a site specific piece, connecting and relating the other works in the exhibition.

Saara Ekström (b. 1965, Finland) has exhibited in the USA, Brazil, Japan and various places in Europe. Her work is held in numerous public collections and she has been nominated for prestigious awards, including the Ars Fennica and the Carnegie Art Award.

The exhibition is curated in collaboration with Laura Köönikkä, Finnish Art Agency. Thanks to the Swedish-Finnish Cultural Foundation.