NEWS Microalgae growing on sea bottoms in shallow areas have a significant role in the marine ecosystem. A group of EcoChange researchers have studied their contribution to primary production in the northern part of the Baltic Sea, and have received results which show that earlier studies have underestimated the total primary production. 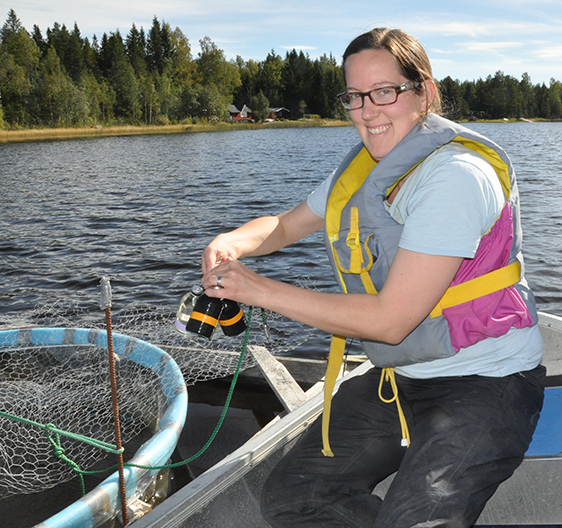 The act of primary production, where energy from sunlight and carbon dioxide are transformed into organic matter, is the base for all life on land and in waters.

In seawater the phytoplankton in the water mass (pelagic) have been considered to be the dominating actors, using the sunlight in the surface water to perform photosynthesis.

Phytoplankton are relevant for the open sea, but in coastal areas there are other important primary producers. For instance, macroalgae and plants grow in shallow waters where the sunlight reaches all the way to the bottom. Furthermore, rocks, sand and soft sediments are covered by microalgae. These benthic microalgae are usually not taken into consideration, but seem to play a significant role in the coastal sea ecosystem.

A study in the north

Compared to pelagic systems in the Baltic Sea, the benthic habitat has received little research effort and monitoring attention. To enhance the awareness regarding the importance of benthic primary producers in coastal areas, a group of EcoChange researchers performed a study in an estuary situated in the south part of the Bothnian Bay. Benthic primary production has rarely been quantified in the northern Baltic Sea, neither for macroalgae and plants nor for the microalgae. In fact, data for benthic microalgae are sparse in the whole Baltic Sea region.

The researchers expected to find a large contribution from the benthic microalgae in this area. And they were not to be disappointed.

Equal in north and south

Base for higher trophic levels

Benthic microalgae grow on all sorts of substrates, such as rocks, logs, sand and soft sediments. They can also grow as epiphytes on macroalgae and aquatic plants.

On soft sediments they have access to nutrients stored in the sediments, and the productivity is therefore often higher than on for instance rocks. They are grazed by benthic fauna, and constitute an important base for higher trophic levels of the food web. Macroalgae and plants are also grazed to some extent, but are more important for providing structure and shelter for organisms.

The role of the benthic microalgae in the Baltic Sea seems to have been underestimated in earlier studies, especially in northern regions. It is often assumed that no primary production takes place beneath the so called photic zone, but earlier studies have shown that benthic microalgae are highly able to adapt to low light conditions, more so than phytoplankton. This ability is more pronounced in cold areas, where benthic algae have been shown to grow at very low light intensities.

It is commonly assumed that the benthic production only contributes significantly to total primary production in small and shallow systems such as lakes. However, due to its shape and bottom topography, approximately 30 percent of the Bothnian Bay area provides suitable light conditions for benthic primary production.

In fact, the total primary production of the entire Bothnian Bay is about three times higher than suggested in earlier studies. The benthic share of the total primary production is also three times higher than previously estimated. The difference in estimations can partly be explained by a lack of data, but also by an overestimation of the importance of phytoplankton and an underestimation of the contribution from benthic microalgae in earlier studies.

The results from the study imply a shortcoming in the way total pelagic primary production generally is estimated, especially when comparing pelagic and benthic contributions and their relative importance for ecosystem processes. The shallow and sheltered coastal areas provide important habitats in marine systems. The magnitude of primary production by benthic microalgae makes these habitats even more important than earlier studies have shown.