Unexpected activity on the Moon

NEWS The lunar space environment is much more active than previously assumed. The solar wind is reflected from the surface and crustal magnetic fields of the moon which has effects on for instance lunar water levels. This according to a dissertation by Charles Lue at the Swedish Institute of Space Physics and Umeå University. 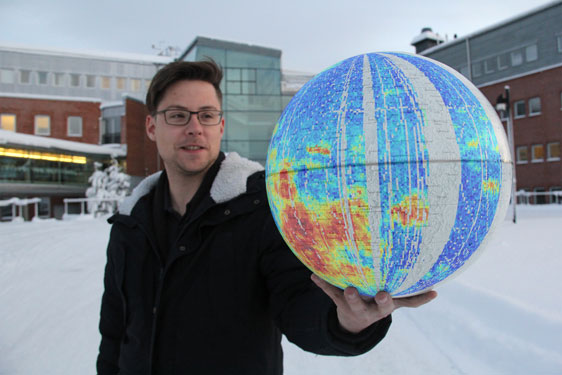 The Swedish space instrument SARA has measured a strong and varied interaction between the Moon and solar wind. The solar wind is a continuous flow of plasma from the Sun which affects the planets in the Solar System and contributes to causing aurora on Earth. The lunar atmosphere, on the other hand, is too thin to show the same phenomenon and the Moon also lacks a global magnetic field to regulate the solar wind. It has, therefore, long been believed that the Moon passively absorbs solar wind without noticeably affecting its surroundings. Now, however, evidence shows that the surface of the Moon, and also local magnetic fields of the lunar crust, reflect some of the solar wind.

“This knowledge is of great importance to the lunar space environment which is affected both on the lunar dayside and nightside surfaces,” says Charles Lue.

The reflected solar wind ions move in spiralling tracks that can take them from the lunar dayside, where the solar wind strikes first, to the nightside of the Moon. In local areas with strong magnetism, the solar wind flow is restricted on the surface at the same time as adjacent areas receive an increased flow. In the long term, this has effects on the surface of the Moon and can, for instance, have an effect on the water levels in the lunar crust.

“The effects can even be seen in the form of visible light – like bright swirls imprinted on the surface of the moon,” says Charles Lue.

The particle instrument SARA (Sub-keV Atoms Reflecting Analyzer) that was developed at the Swedish Institute of Space Physics travelled to the Moon on board the Indian satellite Chandrayaan-1. SARA studied the solar wind interaction with the Moon in 2009, and the observations made by the instrument have since been analysed by researchers, among them Charles Lue.

“The observations help us map and understand the variations in the lunar space environment. They also give us clues about the physical processes involved and the long-term effects they have on the lunar surface,” he explains.

Charles Lue comes from Nyköping and has a Degree of Master of Science in Engineering from Luleå University of Technology.

The public defence of the dissertation takes place at 10:00 in the auditorium at the Swedish Institute of Space Physics in Kiruna.