NYHET The Baltic is changing. Historically this is not remarkable. During the course of time the salinity has increased and decreased, the temperature has risen and declined, and the nutrient status has changed. These alterations in environmental conditions have led to variations in both species composition and population sizes of organisms in the sea. 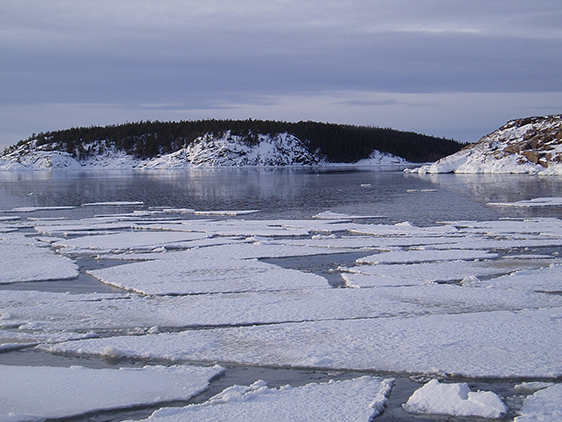 However, despite our knowledge of how nature changes over time, we can now definitely say that the Baltic is experiencing a completely new phase. With support of over 30 000 scientific articles, the Intergovernmental Panel on Climate Change (IPCC), has stated that human interference with the climate system is occurring. During the past five years, the strategic research programme EcoChange has studied the impact of climate changes on the Baltic ecosystem. Results and new insights were presented at a conference in March.

Within 100 years the temperature in the surface water is projected to increase by two to four degrees.  This will be accompanied by an increase in precipitation, and consequently riverine runoff of freshwater, humic substances and other organic matter transported from land to sea. Salinity will decrease.  Obviously, this will have an impact on an ecosystem already exposed to eutrophication, overfishing, contaminants and invasive species.

The EcoChange programme began five years ago with the approach of using the Baltic as a model system to investigate effects of climate change. It is well known that the salinity and surface water temperature decrease from southern Baltic to the north in Bothnian Bay. These two parameters are very important for the structure and function of the ecosystem. A valuable insight generated from Ecochange projects is the large differences among the sea basins of the Baltic. A higher temperature will not have the same impact in the south as in the north, and this is also true for the expected larger runoff.  In a climate changed future the situation in the southern parts of the Baltic will in some ways resemble the situation in the northern parts of today.

The amount of dissolved organic carbon (DOC) of terrestrial origin is higher in the Gulf of Bothnia compared to other parts of the Baltic, and the composition varies. In the future, the loading of DOC to the Baltic will have increased compared to today, and several EcoChange studies show impacts of this. The DOC can be utilized by bacteria, which are thereby promoted. Competition from bacteria for inorganic nutrients will probably decrease the production of phytoplankton. The ratio between the production of bacteria and phytoplankton is already higher in the north, 50/50, compared to the ratio in the south, which is 5/95. This difference will accentuate in the future.

Bacteria-based food webs generally have more trophic levels than phytoplankton-based ones. Each step implicates losses through respiration, and therefore the production at higher levels of the food web will decrease in a climate-changed future. The ecosystem will plainly be less efficient.

Terrestrial DOC contains humic substances which colour the sea water brown. The resulting poorer light climate and increased competition from bacteria may decrease phytoplankton production. Ecochange studies of an estuary in the Bothnian Sea shows a clear seasonal variation, with bacteria dominating the production during spring, while phytoplankton dominate during the summer. The availability of the DOC to bacteria also varies during the year, with the highest availability during spring and closest to the river mouth.

The complicated role of cyanobacteria

Cyanobacteria are often mentioned in connection with harmful algal blooms, which are a problem mainly in the Baltic Proper. The blooms have increased during recent decades, and are at least to some extent associated with eutrophication. Several EcoChange projects have studied the role of cyanobacteria, and how this group of organisms is predicted to be affected by climate changes.

Cyanobacteria show a clear gradient from south to north in the Baltic. In the northernmost parts they constitute merely one percent of the total phytoplankton community, whereas 35 percent of the phytoplankton in the southern Baltic Proper are cyanobacteria. There are large differences between genera of cyanobacteria, and only a few of them cause problems. Species diversity was studied in one EcoChange project, and the results show a considerably higher diversity than was earlier known. However, in a global perspective the diversity of cyanobacteria species in the Baltic is low.

Many cyanobacteria are able to fix nitrogen, and therefore nitrogen seldom has a role in regulating their populations. Phosphorus, on the contrary, has an important role.  EcoChange research emphasizes the significance of phosphorus regulation of cyanobacteria, especially in the northern parts of the Baltic. Phosphorus is correlated with salinity, which makes it complicated to determine the regulating factors. Studies show that both temperature and salinity have an impact on the cyanobacteria production.

Knowledge of factors which regulate algal blooms is important to understand climate change effects. Some EcoChange research shows that there will be a shift in the occurrence of blooms, from late summer to the earlier summer months. The consequences of this have not yet been determined.

When the environmental status of the Baltic is discussed, it is often with focus on the oxygen deficiency in the bottom waters of the Baltic Proper. Oxygen deficiency is associated with the concentration of nutrients in the water, which increases phytoplankton production. Consequently eutrophication will worsen the situation. However, research shows a more complicated picture, where temperature as well as DOC also have an impact on the oxygen status of the bottom waters. EcoChange studies report a direct link between plankton respiration and temperature, which implies that an increased temperature may worsen the oxygen situation.

So how about fish? Will we have more or less fish in the future? Due to the less efficient food web, together with an increasing water temperature, the fish production generally is expected to decrease. Fish belong to the higher levels of the food web, and within EcoChange the complex relationships between fish species at different trophic levels have been studied. The relationship between fish species can change during the life span of the fish, and the role of fish in the ecosystem is considerably more complicated than was earlier known.

Contaminants in a changed sea

Long-term monitoring has revealed how contaminants in organisms vary over time. Many historical substances, such as PCBs, DDTs and dioxins, show significant declines in fish and guillemot eggs since the 1970s. Dioxins in Baltic sediments are also declining, faster in coastal areas than offshore. Some modern chemicals, such as brominated diphenyl ether flame retardants and perfluorinated compounds, increased over the years and have only begun to decrease recently. The situation is far from uniform, and time trends depend on the contaminant and the location. Other recently measured compounds of concern in the Baltic include pharmaceuticals and brominated compounds produced naturally by algae.

The downward trend for many organic chemicals in biota shows that actions taken to improve the environmental status in the Baltic have been successful. However, new problems appear, such as the fibre banks along the Bothnian Sea coast which are contaminated from historically extensive pulp mill activities along the coast. These sediments appear to be leaking mercury, dioxins, PCBs and chlorinated pesticides back into the environment, and the role of climate change in this process is being studied in an extensive project within EcoChange.

Temperature, river runoff, DOC and ice cover are under climatic control and will change in the future, with consequences for the delivery and bioaccumulation of contaminants. As for the notorious dioxins, EcoChange research has contributed to knowledge on how to trace the sources of the different substances in a relatively detailed way. This will be an important piece of the puzzle in the work of establishing actions to reduce impact on economically important fish species which hold high concentrations of dioxins. Particulate matter and DOC have an important role in the transport and fate of contaminants within the ecosystem, which is shown in EcoChange studies on mercury and organic chemicals. EcoChange researchers are investigating the processes by which contaminants are mobilized from fibre banks sediments and bioaccumulated into bottom-dwelling organisms. Climate change effects and invasive species such as the burrowing Marenzellaria worm are thought to be relevant factors.

EcoChange has expended considerable effort and has advanced knowledge concerning the dispersal of contaminants in the environment. As an example, the atmospheric pathways of chlorinated pesticides have been studied in the Bothnian Bay, with special attention to the influence of future ice cover loss. Ice acts as a lid, inhibiting exchange between the water and air. On the other hand, contaminants are deposited on top of the ice, where they can vapourize back into the atmosphere or be released into the water when the ice melts. In the north, precipitation and fallout deposit chlorinated pesticides to a catchment area that is seven times larger than the Bothnian Bay. Are these pesticides then transported to the Bay via rivers? This research is still in its initial phase, and insights are expected as a result of planned studies during the coming years.

Five years of intensive research on the effects of climate changes on the Baltic has generated new knowledge of how the ecosystem will respond. EcoChange results can be integrated into the work of the management authorities, who are in great need of advice and knowledge to meet the international agreements for management of the Baltic Sea environment.

But the results have also been a source for more questions, and the consequences of climate changes to the ecosystem are still far from clear. The close contact between researchers and management authorities helps the EcoChange programme board to set priorities for future activities. The strategic research programme EcoChange includes a great number of researchers with broad competence within biology, chemistry and ecology. They are ready to continue to solve the puzzle that will give a picture of the future Baltic Sea.

The conference through a camera lens