NYHET A passion for research led UCGS’ Guest Professor Gabriele Griffin to studies in Literature, Feminist Theory and Psychology. For her important contributions, both as a researcher, supervisor and consultant, she was appointed as one of Umeå University’s Honorary Doctors 2011. 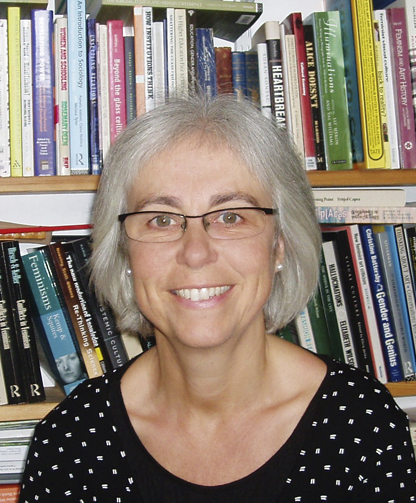 During the time she was finishing her dissertation, Gabriele also worked as a full-time lecturer. Her interest in research was an important incentive to be able to finish.
- I love doing research, and I love the stimulation of trying to discover new things. Working on Simone Weil and Iris Murdoch was partly fun because of all the other reading places their work took me. However, combining philosophy, theology, literature and feminist theory in my PhD was not easy and my examiners – coming from traditional disciplines – gave me quite a hard time. Still, the academy was definitely changing.

Gabriele’s passion for women’s issues was raised early in life.
- I come from a family of many women, with three sisters and one brother. But my parents’ marriage was in many ways traditionally bourgeois, with my mother staying at home, having been denied the possibility of going to university which she regretted all her life, and my father acting as provider. I did not want that kind of life. My family is also a fairly academic one, on my mother’s side we have a long tradition of academics. In the seventies the feminist political and philosophical movement was very exiting, and I had a lot of friends who were interested in feminist ideas. This raised my curiosity. I wanted to understand gender relations and why women were treated in certain ways.

- At the time that I started to teach the big “canon wars” raged in British academe. These were exciting times when there were huge debates about making curricula more inclusive and moving away from ‘dead white male’ authors. This created brilliant opportunities for including work by women writers – white, black, working-class etc. – in syllabuses, and since there was no precedent, one could set up completely new course content. This really fuelled my passion for women’s writing. In my research, I started to move more and more into Women Studies, and I expanded from more traditional literary studies to also looking at other popular cultural phenomenon, says Gabriele.

In the eighties there were big changes in the British higher education system. Money became an even bigger issue than it had been, and the more students you got, the more money you got.
- Women Studies turned out to be one of the winners in this system, because we had a lot of students. We were able to recruit many women to our courses, often women in their forties that had been left outside of the educational system earlier in life. They now wanted to take the opportunity to educate themselves, and were very keen to explore Women Studies.

During her time in academe, Gabriele has supervised about 25 PhD-students to successful completion, and that is something she will continue doing.
- I love teaching; nowadays it is mostly supervising PhD- and master students. My current research involves the relation between biotechnology and cultural constructions of the family. Today, we have the first generation of adults that had donor fathers; I want to investigate these donor offspring’s imaginary in relation to their biological fathers. For this I look at different cultural phenomena: plays, films, blogs and other online material, to see how ideas of family and fatherhood are articulated in offspring narratives. Together with colleagues from Umea, I am also working on a study of the emotional politics of research collaborations. The ‘affective turn’ in the social sciences and in cultural studies has enabled the exploration of emotions in a range of contexts where they are frequently unacknowledged but play a significant role, as in research collaborations. Contrary, for example, to the notion that one chooses to collaborate with ‘the best’ in the field on the basis of their research excellence, issues such as trust, the reliability of co-researchers, indeed, whether one actually likes them or not, play a significant role in deciding whom to collaborate with. 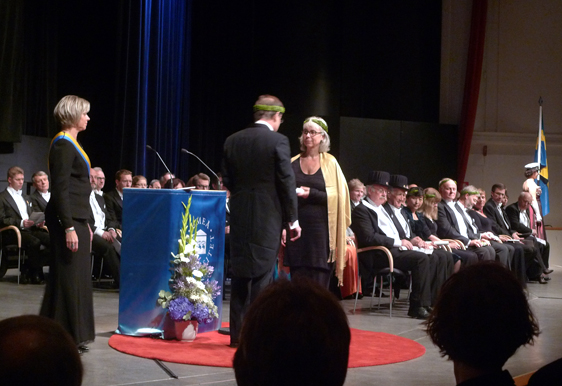 In the future, Gabriele hopes to continue her collaborations with Swedish researchers. Apart from UCGS, she also collaborates with Heidi Hansson, Professor in English Literature at Umeå University. When Gabriele found out that she had been appointed honorary doctor, it was a big surprise.
- I was delighted when I found out! It is a great honour and I am really pleased! This is really recognition for the entire research field of Women’s and Gender Studies, not only for me. I had a really good time at the ceremonies; I was amazed at how much singing and games went on at the banquet dinner. I have never been to a dinner where people stand on their chairs singing songs! It was fantastic and thoroughly enjoyable.