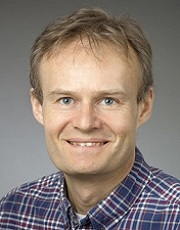 African sleeping sickness is caused by Trypanosoma brucei. We study nucleotide metabolism in this parasite, mammalian cells and other species.

We are studying nucleotide metabolism in vitro and in vivo by studying isolated enzymes (e.g. ribonucleotide reductase and nucleoside kinases) and by analyzing intracellular nucleotide pools in wild-type and knockdown cells exposed to nucleosides and/or drugs. The knowledge and understanding of basal cellular nucleotide metabolism processes obtained from these studies will help us and others to design drugs that exploit differences in these enzymes and pathways to selectively kill malignant cells and pathogens (e.g. Trypanosoma brucei).

Enzyme regulation/oligomerization: Nucleotides are used as energy carriers, phosphate donors, cellular regulators, and building blocks for DNA and RNA synthesis. Nucleotides can be produced by de novo and salvage pathways and some of the enzymes involved (e.g. ribonucleotide reductase) are allosterically regulated by nucleotide-dependent protein oligomerization. Our lab is particularly interested in such enzymes, which we investigate by complementary enzyme activity assays and direct protein oligomer mass measurement techniques such as Gas-phase Electrophoretic Mobility Macromolecule Analysis (GEMMA).

Mammalian ribonucleotide reductase is composed of alpha and beta subunits and is regulated by two allosteric sites located on the alpha subunit. One of these sites, the overall activity site, binds ATP or dATP. We have previously seen that dATP (enzyme inhibitor) and ATP (activator) induce the formation of an alpha-6-beta-2 protein complex. The type of protein complex varies between species and we are now trying to delineate the molecular mechanism responsible for the opposite effects these two nucleotides have on enzyme activity in mammalian cells and other species.

T. brucei is able to accumulate unusually high levels of dATP when it is cultivated in the presence of deoxyadenosine. This strong salvage capacity can be utilized to activate nucleoside analogs that can be used as drugs against T. brucei. We characterize enzymes that are involved in the metabolism of deoxyadenosine and other nucleosides in T. brucei and exploit the unique features of these enzymes for drug discovery against the parasite.