Research group We study the role of bacterial genotoxins in modulation of intestinal mucosa homeostasis.

Teresa Frisan Lab has a long-standing interest in understanding the effects on eukaryotic cells and the role on acute and chronic bacterial infections of a relative novel family of bacterial toxins, defines as genotoxins, since they induce DNA damage in the host cells.

The initial focus of the lab was to understand the mode of action of the first discovered member of this family: CDT, which was still not characterized. We have shown that exposure to high toxin doses activates the classical DNA damage response (DDR), orchestrated by DDR sensor kinase Ataxia Telengiectasia Mutated (ATM) kinase leading to activation of checkpoint responses that block cell proliferation and activate DNA repair mechanisms. If the DNA damage is beyond repair, most of the mammalian cell types tested undergo senescence, while T and B lymphocytes are more susceptible to die by apoptosis. Conversely, exposure to low toxin doses have shown to promote classical signs of carcinogenesis, such as cell survival and acquisition of genomic instability.

There are several puzzling questions that still need to be addressed in this field, such as: why bacteria have acquired these unusual effectors that target the mammalian DNA, and differently from other well-characterized bacterial toxins, do not cause an immediate cell death in most of the host cells, but promote senescence, characterised by an active secretory phenotype? Why intestinal commensal bacteria and probiotics also produce these effectors? Is the role of the genotoxins different when produced by pathogenic bacteria? Can these toxins exert carcinogenic effects in chronic infections and if yes in which conditions?

To answer these questions, we have developed an in vivo model, to assess the role of the typhoid toxin produced by S. Typhi. We have chosen this bacterium because is the only genotoxin-producing bacterium that can establish chronic infections and is associated with increased risk of tumor development in humans. However, this poses a challenge since S. Typhi is an exclusive human pathogen. Therefore, we have constructed several S. Typhimurium strains expressing either a functional (Figure 1) or non-functional typhoid toxin and causing a systemic typhoid-like infection in immunocompetent mice. 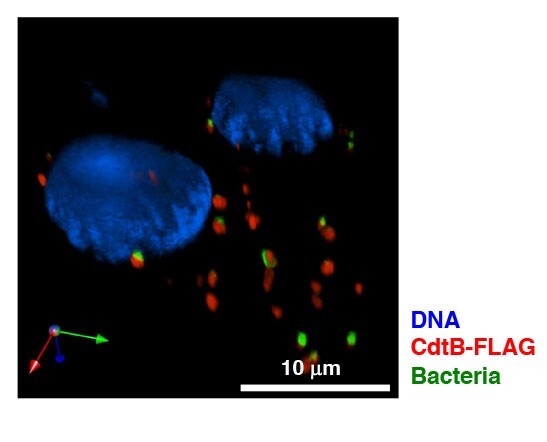 Unexpectedly, infection with S. enterica expressing the typhoid toxin does not cause acute cell death but plays a key role in reprogramming the host immune response towards an anti-inflammatory status (Figure 2) and favors the establishment of a persistent infection. This effect on the host immune response is tissue specific, since it is observed in colon, but not in liver and spleen. The results indicate that this unusual bacterial effector is not a classical toxin, but acts as immunomodulator, highlighting a complex and tissue specific crosstalk between two very conserved stress responses: the immune response and the DNA damage response (DDR). 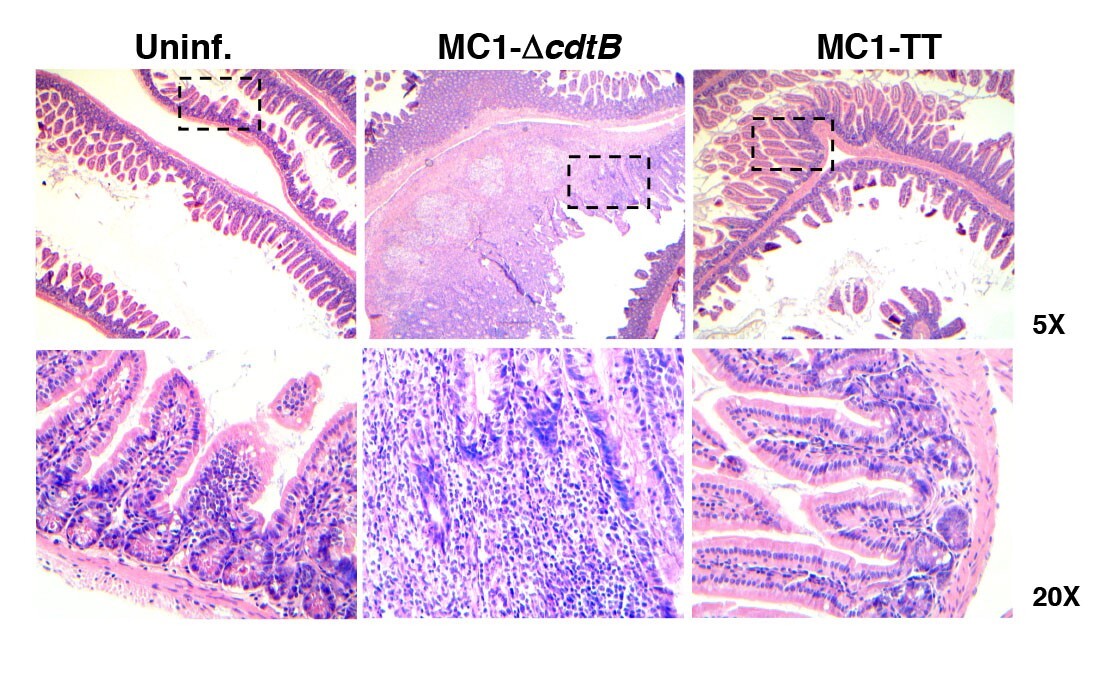 Figure 2. Haematoxylin and eosin staining of the intestine of uninfected mice or mice infected for 10 days with the control (MC1-ΔcdtB) or genotoxigenic MC1 (MC1-TT) strains. The dashed squares indicate the area that is enlarged in the lower panel. Note the prominent inflammatory response induced by the control strain, which is absent in mice infected with the bacterium expressing the typhoid toxin.

The next step is to understand how activation of the DDR modulates the host immune response, and whether the final outcome is different in healthy subjects and in individuals who are susceptible to chronic inflammation or cancer. To address this issue, we are using a combination of in vivo and 3D human organotypic models (Figure 3).

Figure 3. Organotypic 3D models. A. Phase contrast micrograph of colonic epithelial cells, grown in 3D culture and stained with hematoxylin and eosin. B. Colonic epithelial cells infected with the control (MC1-ΔcdtB) or genotoxigenic MC1 (MC1-TT) strains for 24h. Activation of the DDR was assessed by immunofluorescence analysis, using antibodies specific for 53BP1 (green). Nuclei were counterstained with DAPI (blue). The arrows indicate cell positive for the formation of 53BP1 foci at the site of the damaged DNA. The white asterisks indicate the presence of colonic fibroblasts embedded in the collagen matrix.

Our research on cancer focus on Salmonella bacterial genotoxins, which cause damage in cells, and in turn infection, inflammation and cancer.

Epidemiological evidence linked chronic bacterial infections or altered intestinal microbiota (dysbiosis) with chronic inflammation and cancer. However, the molecular mechanisms that promote tumour initiation/progression, determine dysbiosis, and whether this is the cause or the consequence of the inflammatory/cancerous lesions are not known.

In this complex context, we study the contribution of bacterial genotoxins, which cause DNA damage and cellular senescence in the host cells, in the establishment of chronic infections and the alteration of the gut-hepatobiliary tract homeostasis. Colonization with genotoxin-producing bacteria can contribute to tumour development under specific circumstances. However, the biological relevance of these toxins remains to be determined, since it is unlikely that their primary function is to promote cancer in the host. To address this issue, we developed a model based on Salmonella Typhimurium, expressing the genotoxin known as typhoid toxin. It is noteworthy that Salmonella is the only genotoxin-producing bacterium associated with cancer in humans.

Specifically, we are interested in understanding the role of the tissue microenvironment, toxin-induced cellular senescence and immunological landscapes in healthy subjects or in conditions prone to inflammatory diseases or cancer in defining the pro-tumorigenic outcome of the bacterial infection. Progress in this field has been hampered by the complexity of the systems, which includes many variables such as the tissue specific microbial ecology and the host immune response. To solve this complex interplay, we developed a in vivo model and are setting up an immune competent 3D organotypic tissue culture system, which will allow us to clarify the molecular mechanisms of bacteria-associated carcinogenesis. This research may result in specific therapeutic protocols aimed at an early, rapid and selective eradication of bacterial populations in patients, thus preventing of the initial steps of tumour development, promoting health and reducing the cost of cancer therapy. 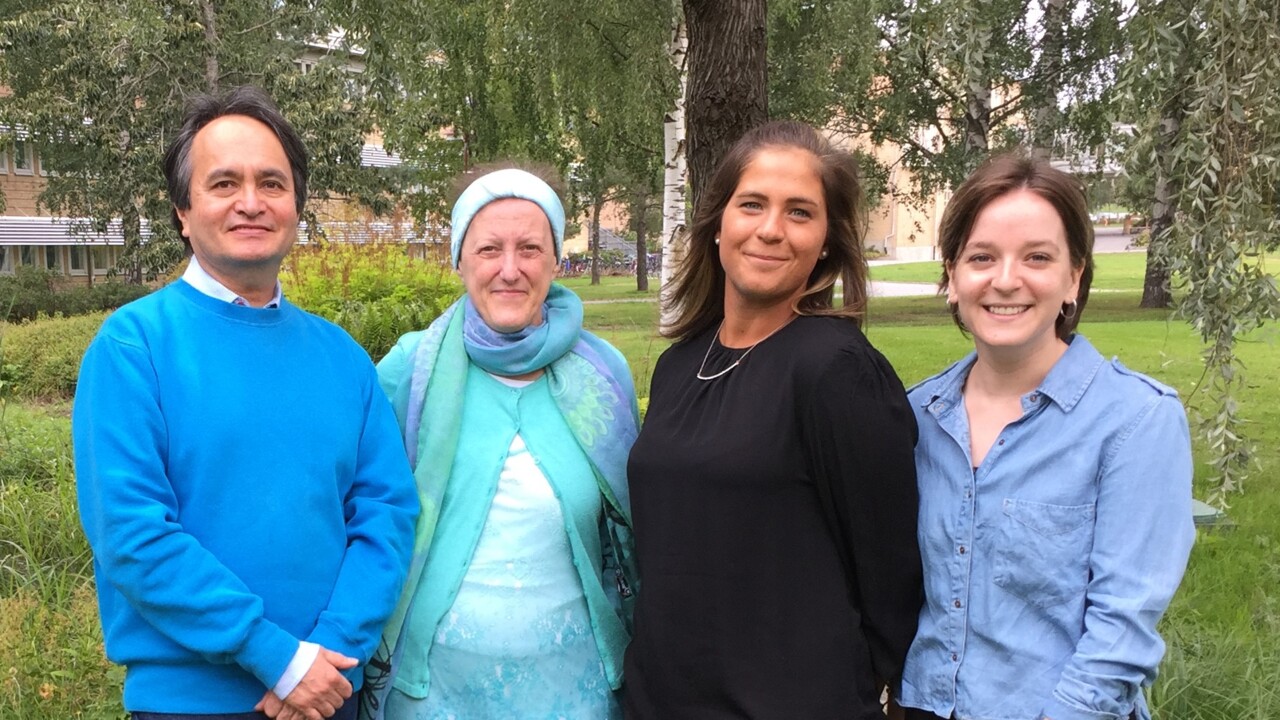 Cancer, Infection biology, Molecular biology and genetics, Molecular medicine
A bacterial toxin that acts as a mediator rather than a killer

Umeå researchers have discovered that bacterial toxins can act as modulators of the host immune response.