Transport of pollutants across ecosystem boundaries and its ecological effects

PhD project at the Industrial Doctoral School at Umeå university.

Johan Lidman is studying the extent to which aquatic insects can act as a transporter of contaminants from aquatic systems to the terrestrial environment. 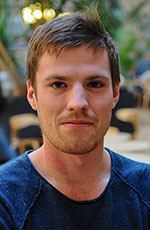 Department of Ecology and Environmental Science, Faculty of Science and Technology

Traditionally, terrestrial systems have been regarded as a source of contaminants and aquatic systems only as a potential recipient of these. Aquatic systems are then exposed to a great risk of accumulating high concentrations of contaminants, which affect organisms in aquatic ecosystems.

This approach has now begun to be questioned as studies have shown that aquatic systems can also act as a source via the transport of contaminants via hatching aquatic insects to terrestrial ecosystems. The insects are later an important food source for insectivorous birds and invertebrates living close to lakes and streams, that can be exposed to these contaminants.

The project's focus is on increasing knowledge about the extent to which aquatic insects can act as a transporter of contaminants from aquatic systems to the terrestrial environment and what potential effects this has on insectivorous birds.

Johan Lidman´s collaborator is the mining company Boliden AB, who hope to gain knowledge that can improve the management of closed mines.

Department of Ecology and Environmental Sciences

We gather researchers, teachers and students in the area of environment and nature.